On Wednesday afternoon I played a solo Command and Colors Ancients (CCA) game out in the shed. The scenario was the Battle of the Great Plains in 203 BC, where Scipio defeated Hasdrubal Gisco, which forced the recall of Hannibal from Italy, the following year. Rather strangely the scenario had no Syphax and his Numidians on the Carthaginians side, so I added two units of light cavalry to cover that. The Carthaginians only have four command cards, while the Romans have six and they move first. It was a very one sided game, the Carthaginians never really got going and in the end were beaten very easily by the Romans 6-1 victory points. Although to be fair there were quite a few Roman units on their last block.

Last weekend Third Con was held at the Canberra Raiders club in Kippax with a range of competitions, including Bolt Action, Saga, Blucher, and the one I'd entered, a 28mm Mortem et Gloriam (MeG) Pacto (4000 points) Classical comp. This was my first MeG comp, I was using Galatians and it proved to be a lot of fun. There were six of us playing, so there were five two hour games over two days, three games on the Saturday and two on Sunday with a break for lunch after the first game.

Game One was against Robert Hooper with his Palmyrans, despite three practice games I made some pretty basic mistakes with my deployment and during the game itself. I was out scouted in every game, in one by 90%! The Galatians advanced but failed to have much of an impact against the Palmyran cataphracts, legionaries and auxilia. They had limited success in the centre but on the right flank failed to drive the Palmyran horse archers from the table, not that it would have made much of a difference. Neither army was broken in the time limit and it was a 10-4 result to Robert.

Game Three was against Christian with his Macedonians under Alexander. This was a very compact army with only two commanders, one legendary, the other talented but was brittle, only breaking on the loss of four units (my Galatians break point was nine). The table had a secure coastal flank and a difficult hill. Both armies advanced and the Galatians struggled against the Macedonian pike. Alexander's Companions destroyed the Galatian cavalry and chariots but then were broken in turn by the Galatian warriors. Alexander escaped to fight another day but this was break point for the Macedonians with a 15-10 result for the Galatians.

Game Four on Sunday morning was against Tony with his Late Achaemenid Persians. The table had another secure coastal flank. The Persians made a double move advance. The Galatian cavalry charged the Persian cavalry and managed to survive a few turns before the Galatian warriors charged in to the hoplites. This game was very slow going and when the time limit was up it was a 10-6 result for the Galatians.

Game Five was against Robert Mun with his Spartans under Leonidas. This was a real cracker of a game that went right down to the wire. The Spartans advanced with a double move and soon the Galatian warriors charged in to combat. At this point the Galatians had an incredible run of lucky dice, regularly rolling wounds on black and white dice while the Spartans were failing to hit at all, with their much better green and yellow dice. The carnage continued and saw both centres almost destroyed. In the end the Galatians just managed to break the Spartans 15-10 but it could so easily have gone the other way!

Last Tuesday afternoon I went over to Rick's place for another Battle Cry game, the scenario was Pea Ridge, Arkansas (Elkhorn Tavern) March 7, 1862. We diced for sides and I was the Confederates again. This is a tough scenario for the Union forces, they're outnumbered but they got off to a good start and led most of the way in the game. The fighting switched between sectors but the Confederate right flank where the Union forces occupied Pea Ridge was the most contested area. In the end the Confederates were lucky to come from behind to win by the narrowest of margins, 6-5 victory points. 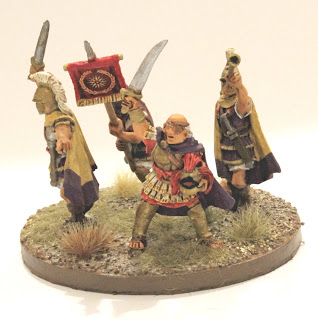 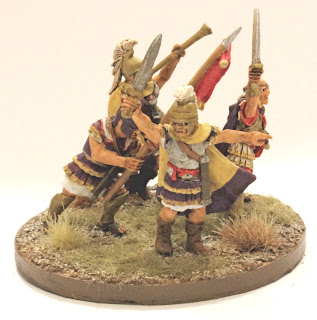 Here's Antigonus One-Eyed trying to rally the troops at the Battle of Ipsus. The Antigonus figure is from the Gripping Beast Polemarch Successors range and the phalangite command are by Warlord Games with a LBM banner.

Plutarch (c.46-c.119 AD) in his life of Demetrius describes Antigonus shortly before his death at the Battle of Ipsus in 301 BC:

Antigonus was almost eighty years old and by this time it was his corpulence and weight even more than his age which incapacitated him for an active part in military operations. He therefore made more and more use of his son, for Demetrius with the help of experience combined with good luck was now conducting the greatest enterprises with some success, and neither his luxury nor his extravagance nor his drinking habits troubled his father.

Xyston Miniatures make an excellent corpulent Antigonus on a palanquin with bearers in 15mm:

Plutarch describes his end at the battle:

Then as great numbers of the enemy bore down Antigonus, one of his attendants cried out, 'They are making for you, sire,' to which the king replied,'Yes, what other object could they have? But Demetrius will come to our rescue.' In this hope he persisted to the last and kept looking on every side, until the enemy overwhelmed him with a cloud of javelins and he fell. The rest of his friends and attendants abandoned him, and only Thorax of Larissa remained by his body. 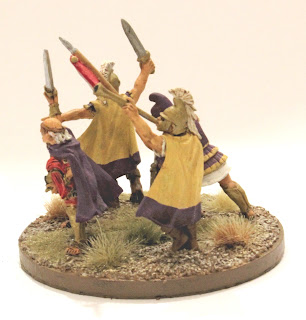 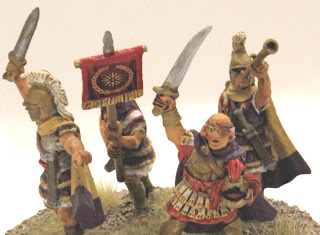