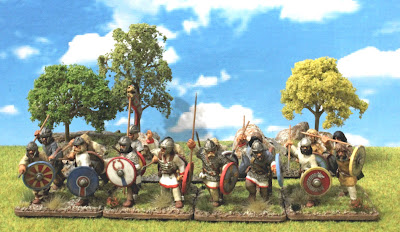 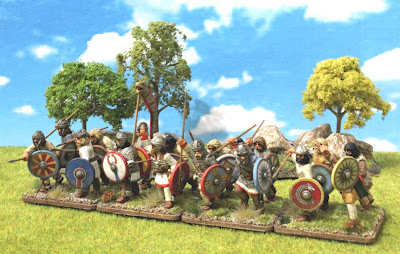 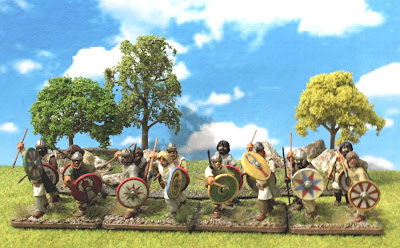 Here are some Goth infantry that I've just finished painting. These are all Footsore Miniatures figures with LBM shield transfers. They're fantastic figures, really detailed with quite dynamic poses. I have some more of them to paint but will work on the Gripping Beast Dark Age Warriors plastic set next as these will be fairly easy to paint. 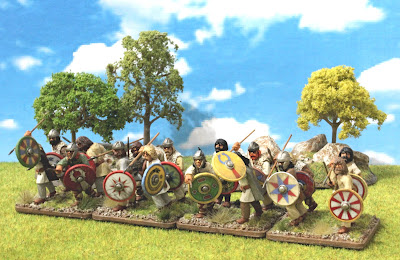 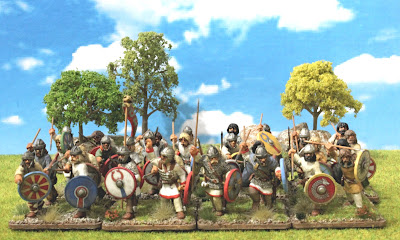 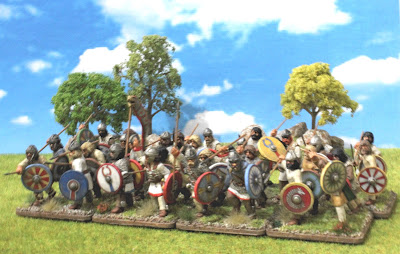 Battle of Dertosa 215 BC - Command and Colors Ancients

Last Wednesday night Rick, Simon and I met down at the Vikings Club in Lanyon for a game of Command and Colors Ancients. It was one of the busiest Wednesday evening meetings I've seen. Despite such a good turn out for a Wednesday night, it looks as if the Little Wars event in November, may not be held as Ian only has four confirmed games so far, and needs a minimum of ten games to make it viable. If you're interested in running a participation game for Little Wars get in touch with Ian Haidon as soon as possible, otherwise it won't happen.

Here are photos of a 100 point Huns versus Patrician Romans ADLG game, that Garry and I played down at the club last Sunday afternoon. This was a bit of learning experience for me as I hadn't played the Huns before with these rules. In the end the Romans won fairly easily but we will have to try another game as we got a few things wrong. I'd like to try a game with Simon MacDowall's Comitatus rules too, as they are actually designed for the Barbarian migration period. I think horse archer armies are tricky to use and most rules probably don't really do them justice, however getting the balance right is quite hard to do.


Last Sunday Garry, Rick and I met at the Vikings Club in Lanyon for the monthly club meeting and we played a Command and Colors Ancients game (CCA) of the Battle of Sentinum, from the Third Samnite War in 295 BC. Rick commanded the Romans, Garry commanded the Gauls (the Senones) and I commanded the Samnites. In the afternoon we also played a Hun versus Patrician Roman 100 point ADLG game, and a game of Battle Ravens, the Dan Mersey shieldwall boardgame. I'll put photos of the Hun vs Roman game in a separate post.

The Gauls had early success on the right flank and before long had established a reasonable lead over the Romans. This brought in to play the Devotio Special Rule where the Romans could sacrifice the consul Decius Mus, when two or more victory banners behind, and receive a victory banner and in subsequent turns, units in combat would hit on a leader symbol. At the end of the turn the Roman player also draws two cards and plays with six for the rest of the game.

Decius shouted to his men and asked them whither they were fleeing, what hope they had in flight; he tried to stop those who were retreating and recall the scattered units. Finding himself unable, do what he would, to check the demoralisation, he invoked the name of his father, P. Decius, and cried: ‘Why do I any longer delay the destined fate of my family? [13] This is the privilege granted to our house that we should be an expiatory sacrifice to avert dangers from the State. Now will I offer the legions of the enemy together with myself as a sacrifice to Tellus and the Dii Manes.’ [14] When he had uttered these words he ordered the pontiff, M. Livius, whom he had kept by his side all through the battle, to recite the prescribed form in which he was to devote ‘himself and the legions of the enemy on behalf of the army of the Roman people, the Quirites.’ [15] He was accordingly devoted in the same words and wearing the same garb as his father, P. Decius, at the battle of Veseris in the Latin war. [16] After the usual prayers had been recited he uttered the following awful curse: ‘I carry before me terror and rout and carnage and blood and the wrath of all the gods, those above and those below. [17] I will infect the standards, the armour, the weapons of the enemy with dire and manifold death, the place of my destruction shall also witness that of the Gauls and Samnites.’ [18] After uttering this imprecation on himself and on the enemy he spurred his horse against that part of the Gaulish line where they were most densely massed and leaping into it was slain by their missiles.

While our game was not quite as dramatic as that, there was close fighting and plenty of ebb and flow in fortunes from turn to turn. In the end the Romans managed to secure a close victory by eight to seven victory banners. 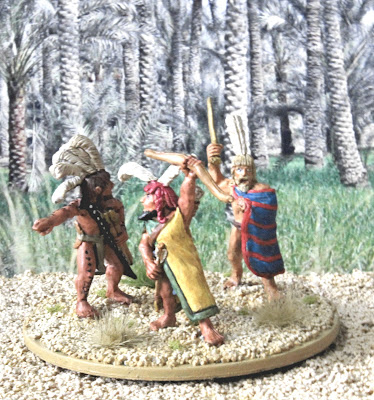 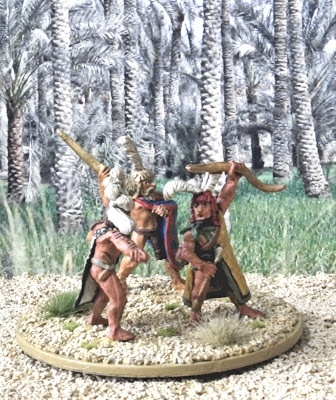 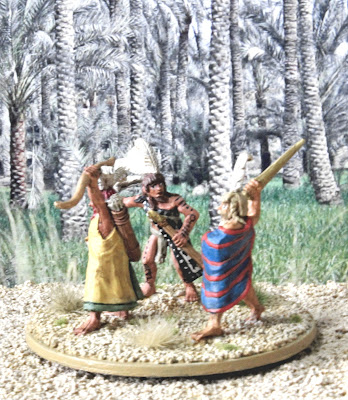 Here are some Bronze Age Libyans to fight my New Kingdom Egyptians. The chariot and most of the archers I painted a while ago. The command stand and archers are Wargames Foundry figures and the chariot, horses and crew are Essex Miniatures. I have another two of these Essex chariots to paint. Warlord Games/Cutting Edge Miniatures have just released an Early Libyan chariot and I have two of these on order. 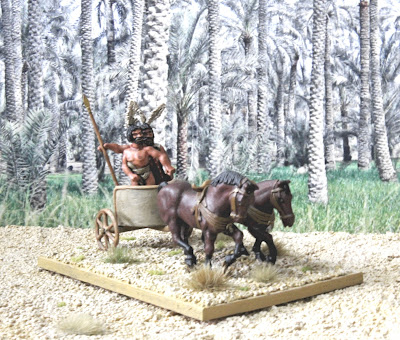 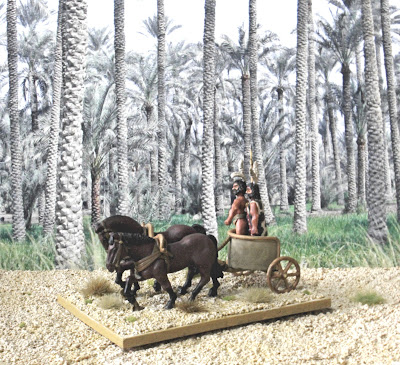 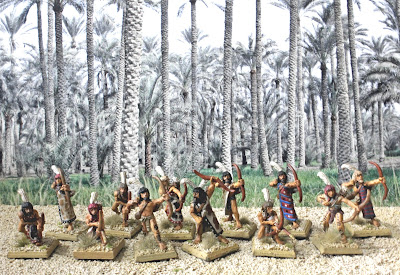 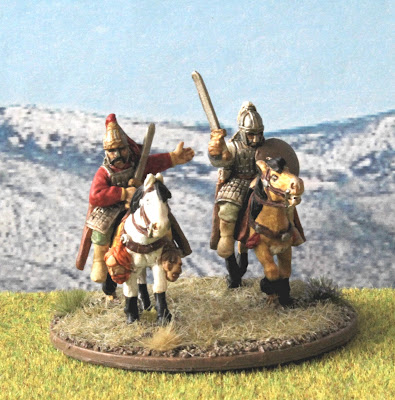 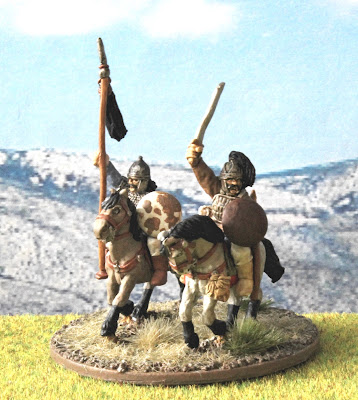 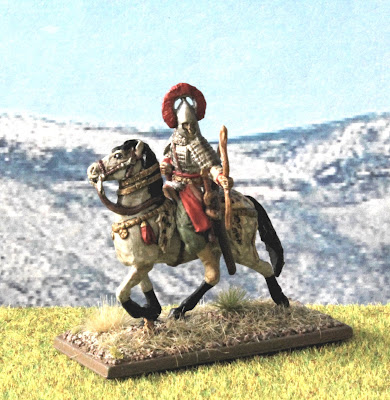 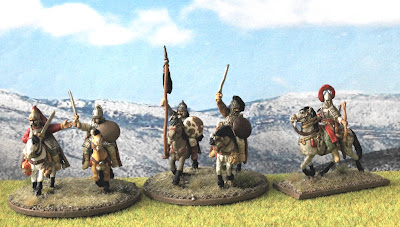 Here are more Huns for my expanding Hun, Late Roman and Byzantine armies. Some of these are command figures and the rest are tribal cavalry. The figures are a mix of Wargames Foundry and Gripping Beast.

I've played two scenarios of the Command and Colors Medieval board game (CCM) recently,  Catalaunian Fields, the Roman left and right flank. In the left flank game, Rick was Aetius and flogged me as Attila, by 7 to 3 victory banners. In the right flank game, the Romans narrowly won by 7 to 6 victory banners. The right flank scenario was quite different from what I'd imagined, as I've just finished reading Simon MacDowall's excellent Osprey book, Catalaunian Fields 451 AD. In the CCM scenario there is no devastating charge by Thorismund's Visigoth cavalry on the Hun and Ostrogoth flank. 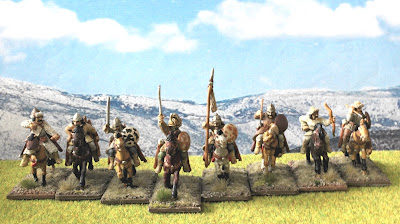 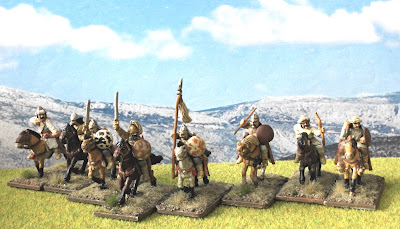 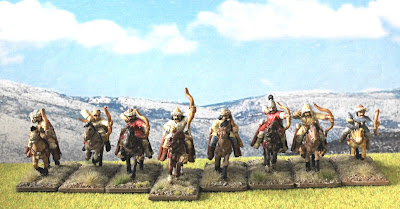 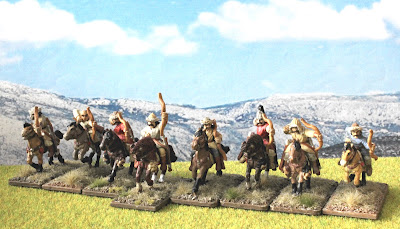