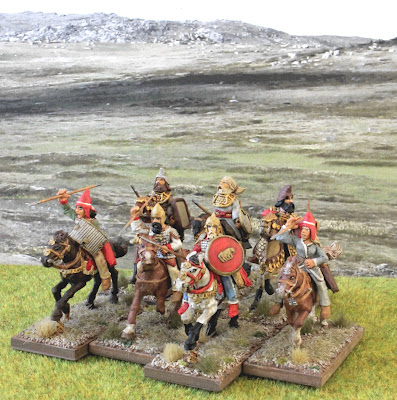 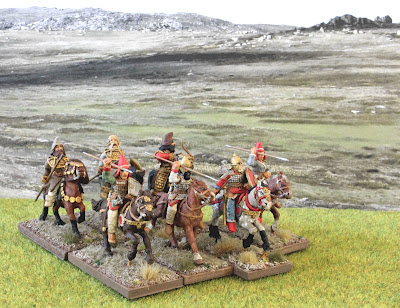 Here are some Scythian noble cavalry that I've just finished painting. The front rank are Wargames Foundry and the back rank are Tin Soldier. The Tin Soldier figures are a bit crude and chunky compared to the Perry Foundry figures but have some nice poses. I have another batch of these I'm painting at the moment. On the positive side many of the Tin Soldier Scythian noble figures are based on the Angus McBride illustrations in EV Cernenko's Osprey book The Scythians 700-300BC which makes painting them easier. On the negative side six of these figures had air pockets in the castings which required filling with green stuff, pretty annoying!

If you're interested in the Scythians, there are two highly recommended recently released books, one is Scythians warriors of ancient Siberia edited by St John Simpson and Svetlana Pankova which is actually the book of the exhibition held at the British Museum in 2017/18. The other is The Scythians Nomad Warriors of the Steppes by Barry Cunliffe. Both books are beautifully illustrated but have excellent text as well, well worth reading cover to cover. 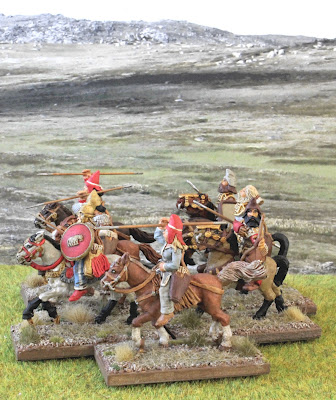 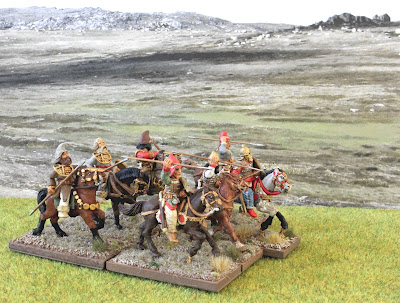 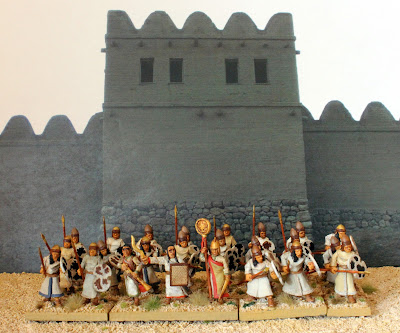 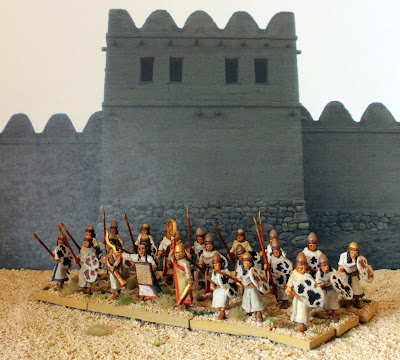 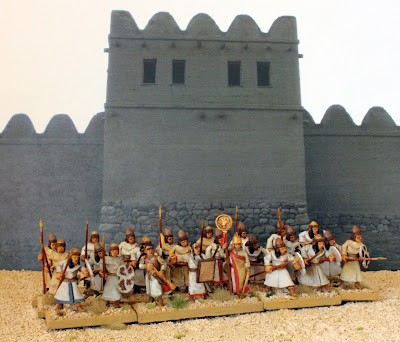 
Last Saturday afternoon Craig came around and we played a Mortem et Gloriam (MeG) game, with a refight of the Battle of Catalaunian Plains. Craig commanded the Roman, Alan and Visigoth army under Aetius and I was Attila with the Huns, Gepids and Ostrogoths. The scenario for this was played as a Pacto game by Simon Hall for the MeG launch recently and is available on the MeG site. For our game I doubled the unit sizes for a Magna game of about 8000 points a side but was short a few figures for some units and had to draft in some other Dark Age troops to make up the numbers.

I followed Simon MacDowall's Osprey book Catalaunian Fields AD 451 for the battle field and deployment and the camps of both armies were off the table. One thing I noticed with the scenario was that the Ostrogoth left flank was a bit light on infantry with only a single unit of combat shy foot archers! In the end it was a straightforward victory for Aetius with Attila's right and left flank pretty much destroyed and only the centre remaining.

I've been looking at my Neo-Assyrian army from the reign of Ashurbanipal (668-627 BC) with the Mortem et Gloriam army list, Later Sargonid Assyrian. I have enough painted figures to easily make up a Pacto (small) sized army of about 3500 points but need a few more command stands, one will be a four horse chariot and the other an armoured cavalry base of three figures. I'm planning a game with them against an all cavalry Kimmerian or Early Scythian army but have to finish painting the noble cavalry and more horse archers.

I'm tempted to get a 28mm Kushite army as opponents for the Neo-Assyrians, Eureka have some nice archers and javelinmen, as depicted in palace reliefs of Ashurbanipal and illustrated in the Stillman and Tallis WRG book Armies of the Ancient Near East (p.111):

I already have quite a large unpainted Nubian army and many of these figures could be used, the cavalry and chariots are more tricky but conversions from spare New Kingdom Egyptian figures are an obvious possibility. 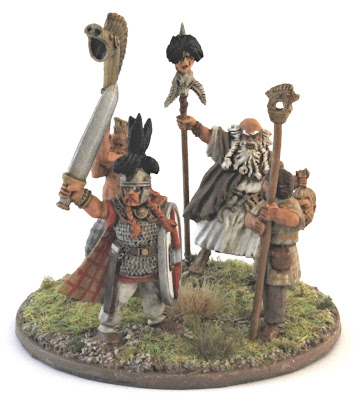 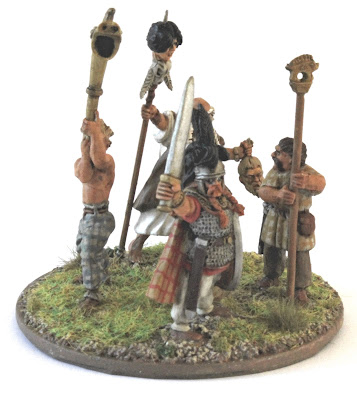 Here's a Celt command stand that I've just finished painting. The chieftain and carynx player are by Renegade Miniatures, the standard bearer by Gripping Beast and the druid with the head collection by Victrix Miniatures. I really like the Renegade Miniatures figures, cricket bat swords not withstanding. They are big, chunky and easy to paint and make a nice change from all the Warlord plastic Celts with manic poses, that are hard to rank up. I have a couple more Renegade warbands to paint as well as a cavalry unit and some of their chariots. 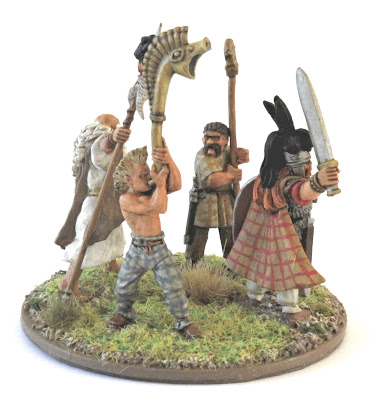 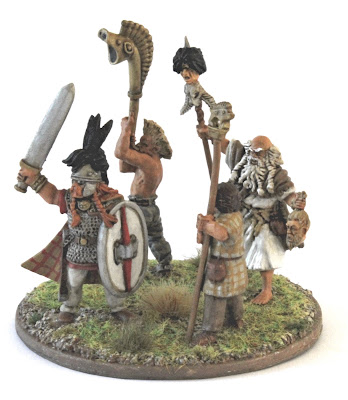 Earlier today I played a solo Mortem et Gloriam (MeG) game out in the shed. The scenario was the Battle of Sabis 57 BC with Caesar's legions taking on the Belgae. The scenario for this was developed by Simon Elliott and Simon Hall for the recent MeG Compendium release and is available as a pdf on the MeG site. We played this battle a few years ago as a Hail Caesar game and the Romans suffered a heavy defeat. I used Spanish cavalry instead of Gallic for Caesar's army as I didn't have enough painted Gallic cavalry. I'm still learning the rules, this is only my fourth game, I was hoping to have the MeG Compendium by now but with all the mail delays this still seems to be a fair way off.