On Monday Craig came over to my place and we played another Lion Rampant Second Edition game out in the shed. This time it was his Late Romans versus my Sassanids and we played Scenario 2: Gladiators Ready! which is a variant on the usual Bloodbath scenario. After deployment each player chooses a champion from the Leader’s unit and they fight a duel rolling six dice each. The two sides gains bonus dice for combat or shooting for every hit scored. The Romans killed the Sassanid champion and gained two bonus dice and the Sassanids gained one.

Combat quickly developed in the centre as the Sassanid elite cavalry all have Wild Charge but the results were mixed. The Romans had three units armed with javelins and were able to whittle away at the Sassanid cavalry wearing them down. Once the cavalry units were down to half strength the Sassanids were done for. A better mixed Sassanid force with more fire power would have been handy. Next time I’ll try a single unit of elite cavalry (cataphracts), two units of heavy cavalry with bow, a unit of light infantry with javelins and a unit of archers. 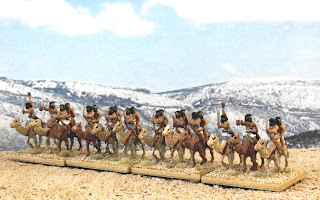 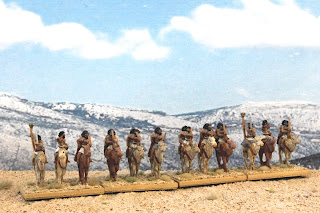 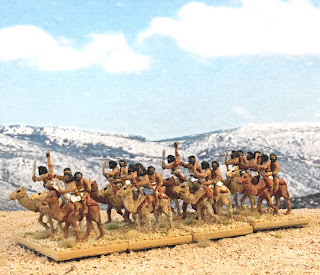 Here are some more Midianite camel riders that I've just finished painting. They are lovely Peter Pig figures that I got from Mick Selman of Mick's Metal Models, true 15mm rather than 18mm. I've included some comparison shots below with Museum Miniatures ones I painted last year, these are larger 18mm figures that are a good match for Xyston. I actually don't mind mixing these ranges as there is a much greater range in human and camel sizes than the difference between 15mm and 18mm! All of my infantry for this army are Peter Pig. Essex Miniatures actually have both a 15mm and 28mm range of Midianites. 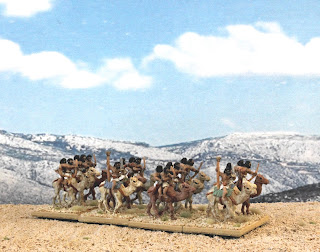 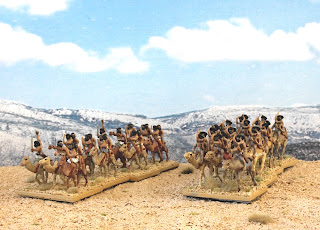 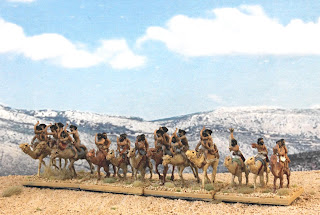 On Monday Craig came over and we played our first Lion Rampant Second Edition game, as we'd both received our copies in the mail last Friday. We played Scenario 9 The Relic (p.150), with my relic stealing Vikings the attackers, while Craig's Anglo-Danes were the defenders. We played the optional Unit Flank and Rear and Shieldwall rules (pp.111-113). The Vikings deployed in the NE corner aiming to exit with the relic on the SW corner, while the Anglo-Danes, deployed in the NW and SE corners, had to prevent them and recover the relic.

While the basic rules haven't changed from the first to the second edition, the content and period covered has been greatly expanded, the page count alone has increased from a sixty four page set with soft back cover to two hundred and eight pages with a hard back cover. There is a one and half page summary of the rule changes from the first edition in Appendix C (pp.200-201). The terms used to describe troop types has been broadened as was case with the earlier Lion Rampant supplements, Crusader States and A Viking in the Sun. The main additions are chapters on optional rules, campaigns and sample twenty four point warbands ranging from Late Romans (and Blemmye!) through to the War of the Roses. There is plenty to digest and enjoy here for both seasoned Lion Rampant veterans and newcomers to the rules, highly recommended!

In our game the warbands converged on the edge of the village. The Vikings had some early success with their berserkers and elite infantry but were worn down by combat and sling shot. A number of flank and rear attacks by the Anglo-Danes proved very effective with armour of the defending units reduced by one. Once the remaining Viking units were at half strength it was all down hill, the last Viking heavy infantry unit succumbed to a hail of sling shot and routed.

On Friday afternoon Garry came over to my place and we played a MeG Pacto game out in the shed, with his Dacians fighting my Early Imperial Romans. We used our standard 28mm 80mm base widths with no reduction in distances but reduced the Kill a Base test range (a type pf morale test) to two base widths rather than three. We haven't played MeG, or with these armies, for a while and it proved to be a very close and hard fought game.

The Romans were the attackers and the armies closed and were shooting before long. The Dacian nobles and warriors with falx launched their devastating charge. The centres were destroyed with heavy casualties, including commanders, on both sides. The game went right down to the final turn with Romans having lost six units and breaking on seven, while the Dacians had lost nine units breaking on ten. In the end the Numidian light cavalry were able to break a Dacian archer unit with missile fire handing the Romans a very tense 15-10 victory.

On Tuesday Craig came over to my place and we played a small 100 point ADLG game with two Early Mycenaean armies. Craig had more archers and medium spearmen in his force, while I had chosen all elite chariots and spearmen as heavy spearmen with pavise. I was the attacker and advanced cautiously but in the third turn my chariots charged in and a prolonged combat ensued.
Craig as usual had bad luck with his dice but I wasn't complaining and casualties quickly mounted. The infantry combat on my left was level pegging but I was outnumbered and Craig's archers threatened the flank. Eventually Craig's chariots were worn down and when I killed one of his commanders his army broke. The elite chariots and heavy spearmen with pavise seemed to have paid off and were worth the extra points.
While I was sorting out my army for this game I dug out my Grand Manner Troy set (see photo below) which I bought about fourteen years ago but haven't done anything with since. This consists of resin walls, towers, a staircase and a gateway. The detail is quite amazing and you can remove various levels on the towers and the interior has stairs, furnishings with spare weapons and shields. Anyway I plan to start painting this, it will take a while! The Osprey books by Nic Fields, Troy c.1700-1250 BC and Mycenaean Citadels c.1350-1200 BC are a good source of inspiration.