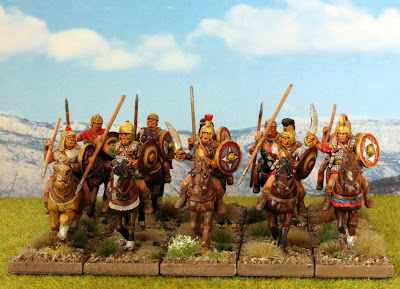 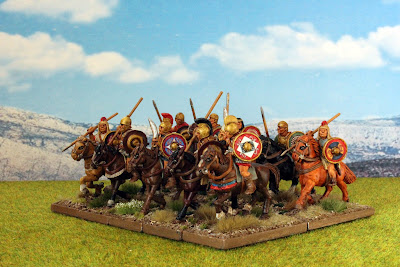 Here are some Spanish Cavalry from the archives. These are a mix of Wargames Foundry, Companion Miniatures and A&A Miniatures figures. 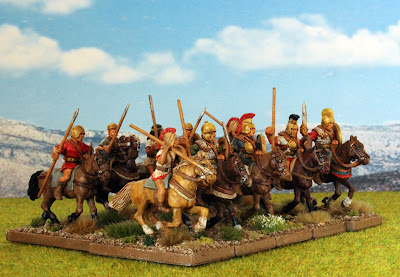 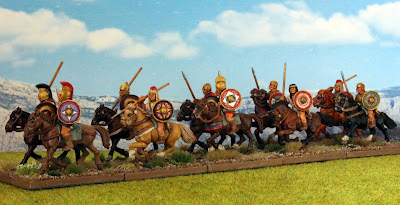 Here is a Roman marching camp (castra) that I've just finished. This will be handy as a camp for my Roman armies and is designed to be placed on the table edge behind a deployed army. The stakes (sudes) are metal and plastic made by Warlord Games and 1st Corps Miniatures. The legionaries' tents are by Baueda and legionary figures are Warlord Games and Black Tree Designs. Steve Barber Models make a fantastic full size Roman marching camp, in resin and metal, that is 56 x 80 cm and costs 275 pounds!

I've just added a rather blurred aerial view of the camp without tents and figures but you can see the ditches and ramparts which were made with triangular balsa covered in Pebeo Raw Sand Mortar and painted. I use this stuff for all my basing, there are heaps of similar products or you could just use PVA glue and sand. The camp area has strips of burnt grass flocking with a few greener bits for variety. 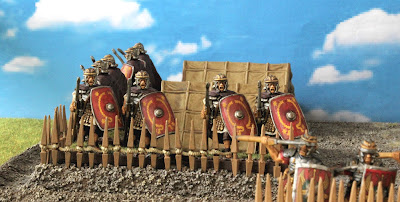 Battle of Cunaxa 401 BC - Command and Colors Ancients Game

Here's another post from the archives, a Command and Colors Ancients game of the Battle of Cunaxa, we played about five years ago. This was a cracking game that went right down to the wire, with the result decided with the final dice throw! Both Artaxerxes and Cyrus were killed, with Cyrus' forces winning 7-6 victory points. Interestingly the Greek hoplites, the Ten Thousand of Xenophon's Anabasis, were not particularly decisive in this game.

Email ThisBlogThis!Share to TwitterShare to FacebookShare to Pinterest
Labels: Battle of Cunaxa, Command and Colors Ancients 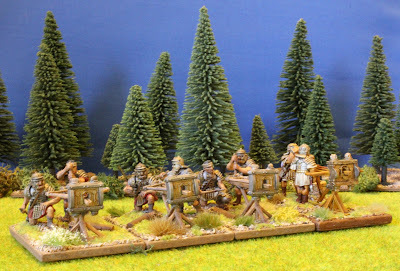 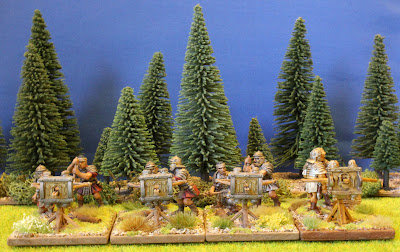 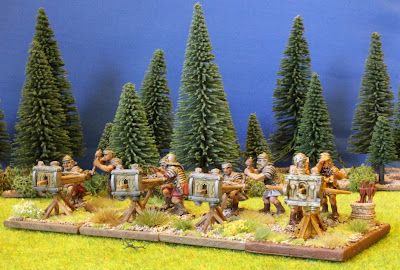 Here's another post from the archives, a battery of Early Imperial Roman Scorpions. These are all Warlord Games models and crew. Three are plastic and one is metal, the model and crew on the right in the photos above. 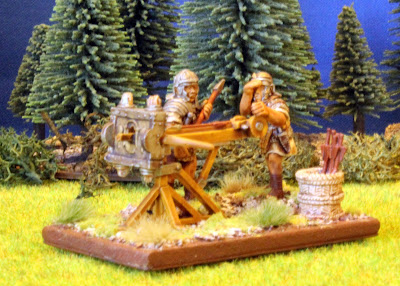 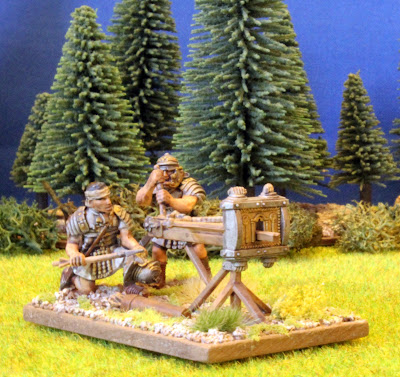 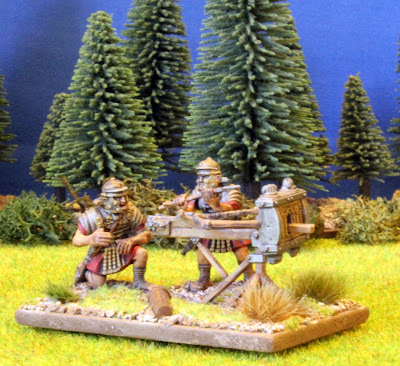 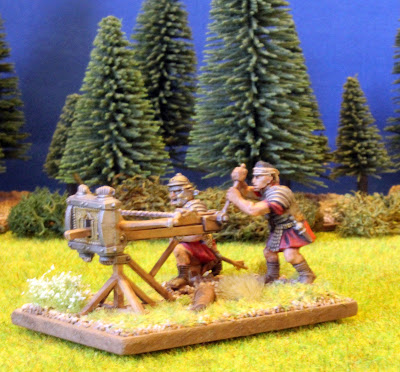 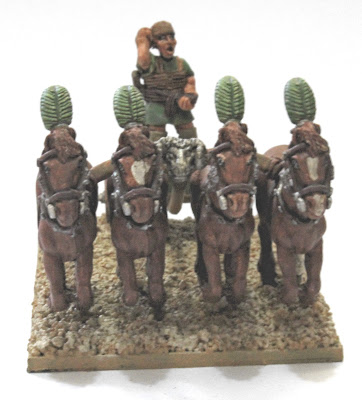 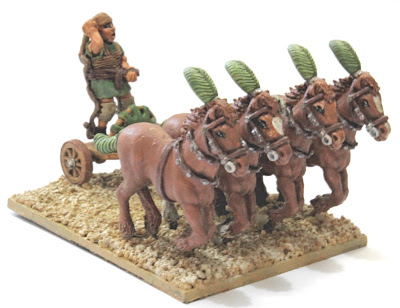 Circus Maximus is the classic Roman chariot racing board game, often imitated but never bettered. it was originally released by Battleline Publications in 1979 but is better known in the 1980 Avalon Hill version. I have never owned the board game but picked up a copy of the rules and bought four Steve Barber Models four horse Roman racing chariots (quadrigae) years ago. These figures have been removed from the website but are still available, I believe if you email and ask for them. This is my chariot for the Greens' faction (factio prasina).

I have one each for the Blues (factio venata), the Reds (factio russata) and the Whites (factio albata). The Greens and Blues were the two main stables, the Reds and Whites minor ones and they were others, the Purples (factio purpurea) and the Golds (factio aurata) but these only operated for a short time during the reign of Domitian. I have made a two part four lane racing arena from 3mm mdf and will post pics of it and the other chariots when finished. An excellent book to get if you're interested in this, is Fik Meijer's Chariot Racing in the Roman Empire. 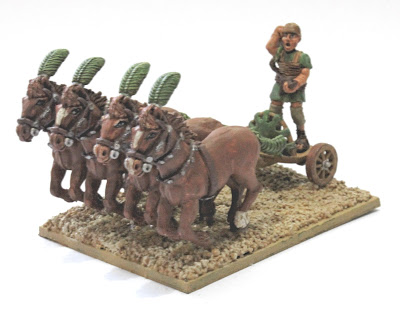 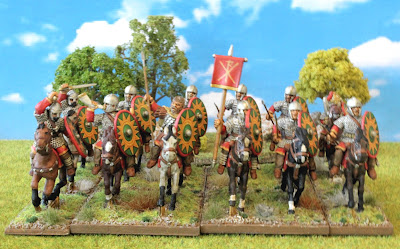 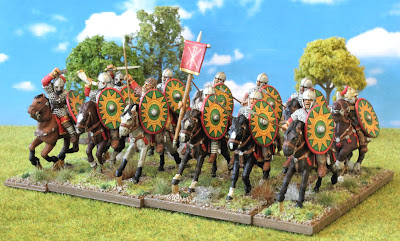 Here are some Late Roman Cavalry with LBM shield transfers, nine are Black Tree Designs, two Gripping Beast figures and a single A&A Miniatures. These have the possible shield designs of the Schola Scutariorum Prima, a guard cavalry unit, under the command of the Magister Officiorum (West) in the Notitia Dignitatum. 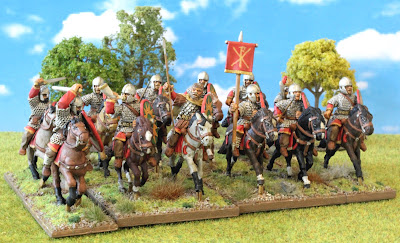 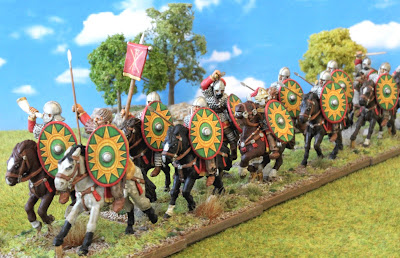 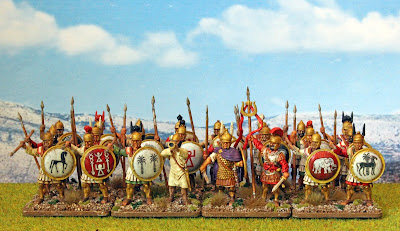 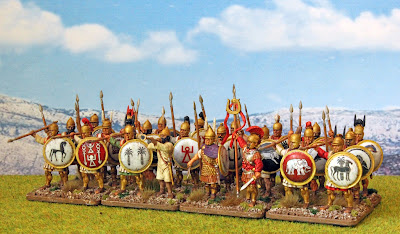 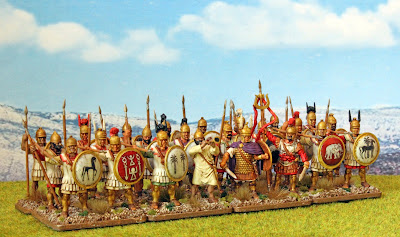 Here's another post from the archives, these are Victrix Libyan Spearmen, with Victrix shield transfers. I haven't been painting much lately, I've been working on movement trays, gaming boards and terrain but do have some more Late Roman cavalry which are nearly finished, so will post those shortly. 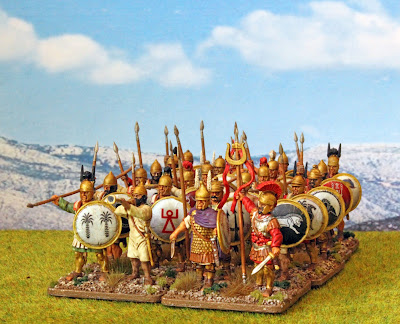 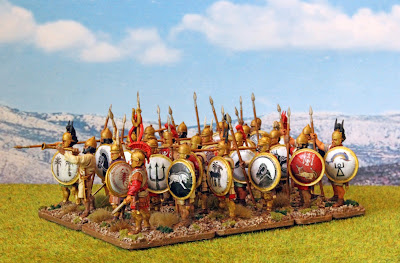 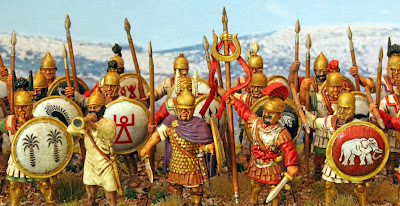 Yesterday afternoon out in the shed I played a solo first game of Soldiers of Rome. These rules by Warwick Kinrade are similar to his Soldiers of God rules which covers the Crusades.The scenario was the Cantabrian War, a small field battle (two hundred points) of Cantabri, Astures and Gallaeci taking on the Augustan legions. The Romans deployed first as the Cantabrians had higher initiative. Each side has three battle plan cards which are reused and four random deck cards which are played and then discarded per turn. Cards can be used for actions, events, pass and discard, hold or trade in. Shooting and combat is decided by dice with disorder inflicted for every hit unless a resolve test is passed. At the end of a turn units with more disorder than stands rout and are removed and army morale adjusted. Once this is reduced to zero the game is over.

I found the pace of the game slow, partly because of the movement and partly lack of familiarity with rules, uses of the cards and unit stats. I used the suggested 28mm ground scale of one pace equals one inch but for future games would increase this as legionaries in close order only moved three inches a turn. Skirmishers don't seem to be able to evade in the rules but have some specific cards, Skirmishers Move, Advance, Loose and Retire and Charge, Melee, Retire to use if you have them. After playing many turns both sides morale was reduced but a result was still a long way off. The Romans seemed unstoppable in combat, unless they were caught in difficult terrain or with a flank or rear charge. The rules are well organised with a handy index, beautiful photos and interesting army lists, stratagems and scenarios. I'd like to try the Siege Assault scenario with a Roman attack on a hill fort at some stage.