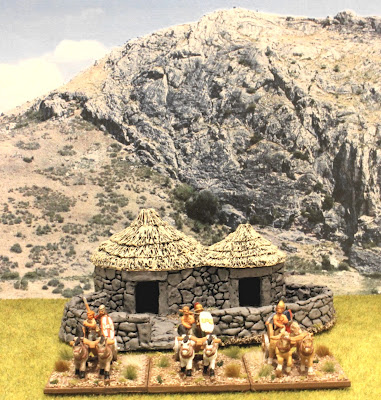 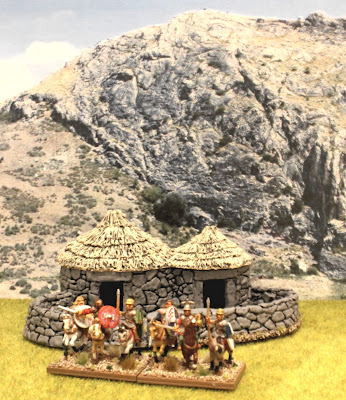 Here are some 15mm Celts that I will use as a Galatian DBA army to fight my Early Seleucids. The figures are a mix of Xyston, Essex, Minifigs and Corvus Belli. Some of the shields have LBM and VVV transfers and the rest are hand painted. The stone huts and enclosure are by Blue Moon. Some of the photos I took didn't past muster, there are three warband elements missing, but you can see them in the back rank of the cropped group photo at the bottom.

The back drop photo was taken at Hattusa (modern Bogazkoy), the old Hittite capital, on our visit there in 2011. The Galatians settled in Central Anatolia in the first half of the third century BC, actually at this site. According to Jurgen Seeher in his guidebook, Hattusha Guide: A Day in the Hittite Capital (p.175.):

The site of Tavium near the village Buyuk Nefeskoy some 20km south of Bogazkoy became the seat of the Trokmer clan, who took the land around Hattusha/Bogazkoy under their control. Buyukkale once again became a fortified citadel, and a small village occupied part of what had been the Lower City. The painted pottery characteristic of the Galatians was recovered here, as well as vessels imported from the Hellenistic cities along the west coast. 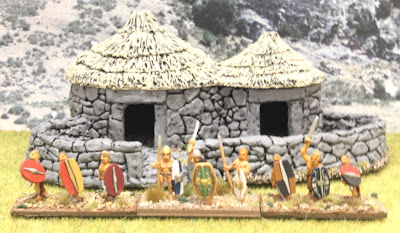 Earlier today Craig, Garry, Gary and I met down at the Vikings Club and played a 69 AD, Year of the Four Emperors, Roman Civil War ADLG game. Craig and Garry commanded the Vitellian forces while Gary and I commanded the Flavian forces. Both sides had 200 points and similar armies, and the game quickly became a protracted legionary slogging match.  The Flavian forces had the best of it at first but eventually suffered heavy casualties and were exhausted. In the end both sides became demoralised in the same turn, although the advantage was slightly in the Flavian forces favour, as the Vitellian centre was totally shot. 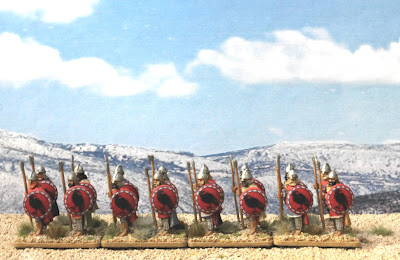 Here are some Varangian Guard that I've just finished painting for my Nikephorian Byzantine army. These are all Crusader Miniatures figures with LBM shield transfers. They are actually spearmen at the ready but I have added Gripping Beast two handed axes rather than spears. 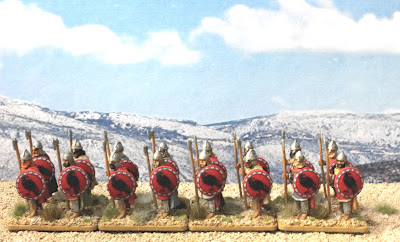