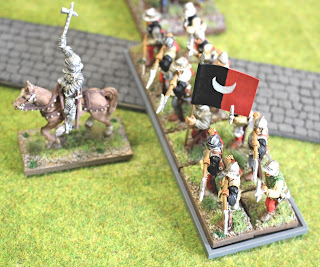 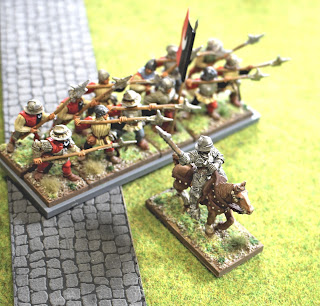 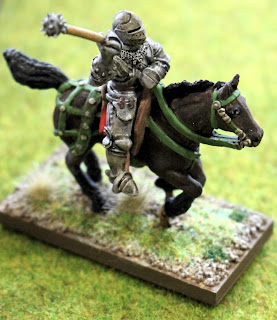 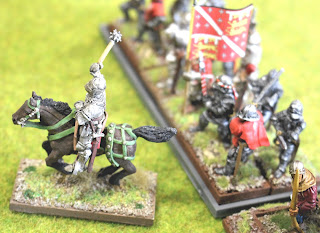 Above are two Front Rank War of the Roses mounted men-at-arms that I've just painted. Like a lot of people I've been really looking forward to the release of Never Mind the Billhooks Deluxe by Andy Callan, as I really enjoyed the games of Billhooks I'd played before. While waiting for my copy to arrive, I thought I'd play a small solo game to refresh my memory on the rules, using two near identical forces of two commanders, and single units of men-at-arms, archers, billmen and skirmishers.

After the initial manoeuvre phase the Lancastrians advanced and shot causing casualties on the Yorkist billmen. Undaunted these charged into combat with the Lancastrian billmen, the resulting melee was a draw. Some withering fire from the Yorkist archers inflicted heavy casualties on the Lancastrian archers and at the end of the turn they broke when they failed their morale test as they were reduced to half strength or less. The Yorkist billmen and archers then both broke after failing their morale tests and Henry put the final nail in the coffin by killing the Yorkist commander. 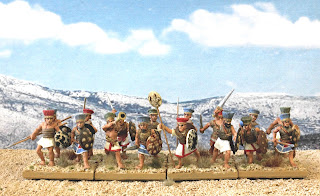 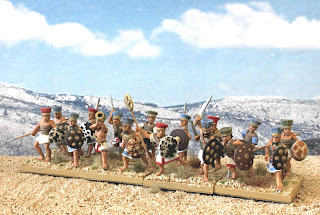 Here are some Philistine spearmen that I’ve just finished painting. Figures are a mix of Castaway Arts, Foundry, Northstar and Old Glory. The archers I painted some time ago but need a few more to bring them up to strength, so will paint the eyes and touch them up to match the spearmen. 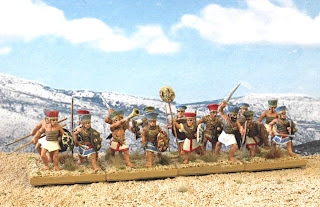 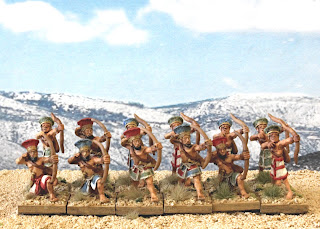 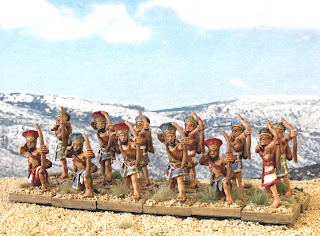 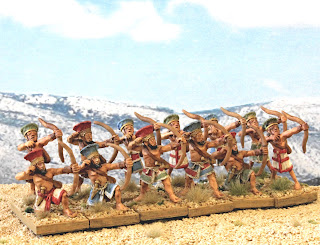 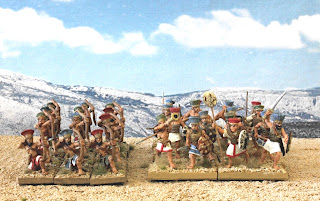 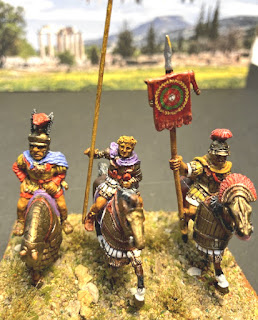 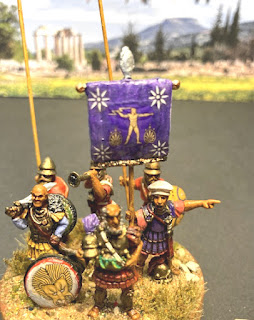 Above is a guest post by Garry of two Successor command stands he has just painted. The first is of Seleucus, a Relic figure with an Essex officer and Aventine standard bearer. The second is Antigonus, a Relic figure with a Relic shield bearer and Aventine figures for the rest. The banners are by LBM with some VVV stars.
This week I received my copy of the new GMT Games, Roman chariot racing game, Charioteer, see photo below. This looks interesting, I've read the rules, they're only eleven pages, not overly complex but use a  mixture of cards and tokens to race the chariots. The game comes with six plastic counters for chariots  but I will use the Steve Barber quadrigae I've been painting for Circus Maximus. Hopefully I will get to try this out soon. 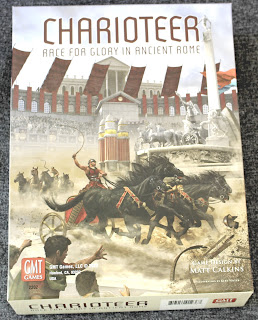 Last Sunday afternoon I played a solo Command and Colors Ancients (CCA) game out in the shed. The scenario was Trebonius' foraging party against Cassivellaunus' Britons during Caesar's invasion of Britain in 54 BC:

Caesar describes the encounter in his Gallic Wars:

...Caesar had sent Gaius Trebonius with three legions and all the cavalry to forage, the enemy suddenly swept in from all directions upon the foragers-so vehemently that they did not even hold their distance from the standards and legions. Our men launched a fierce counter attack, drove them off, and did not stop following them until the cavalry, trusting the support of the legions they saw following right behind, threw the enemy into headlong flight and killed a large number of them, giving them no opportunity to regroup to take a stand or jump down off their chariots.

The Romans had six command cards while the Britons only had five command cards but moved first. The Britons played a mounted charge card first, attacking on their right and left flanks with their chariots and light cavalry. The Romans played a counterattack card with their Gallic and German cavalry forcing the Britons to retreat with casualties. In the end it proved to be a hard fought game with Cassivellaunus' Britons giving a good account of themselves, the Romans winning 6-4 victory points. 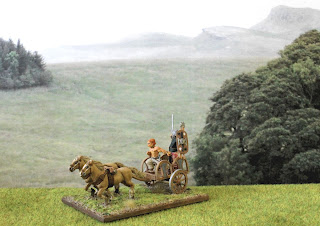 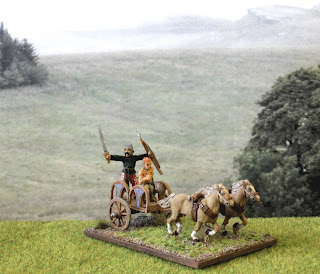 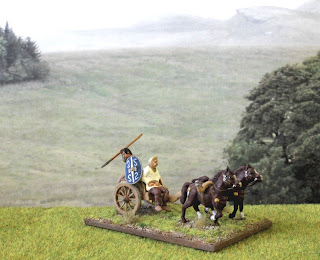 Here are three Celt chariots that I've just finished painting. One is Warlord Games and the other two are Wargames Factory. I have a Command and Colors Ancients (CCA) game planned with Trebonius'  foraging party against Cassivellaunus' Britons during Caesar's invasion of Britain in 54 BC:

Some of these chariots and the ancient German cavalry I painted recently will see action in that game. 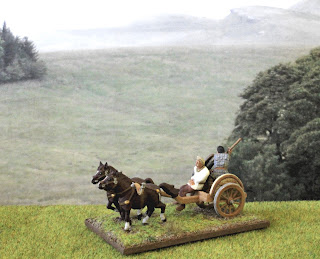 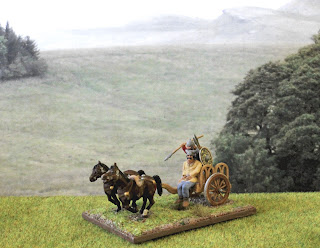 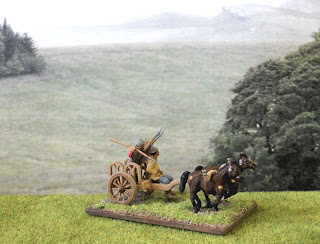 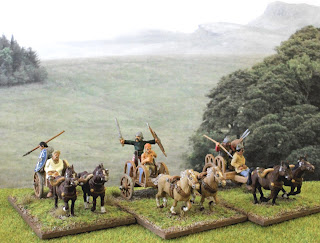 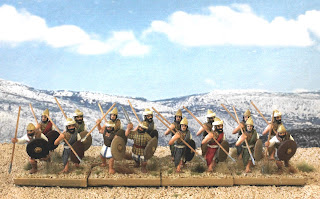 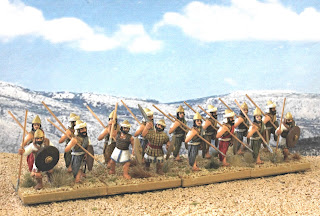 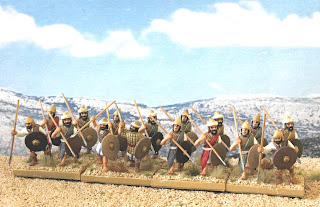 Above are some Hebrew Gibborim 'mighty men', these were the elite infantry of the Hebrew/Israelite army, originally the personal retinue of David in his time as a Philistine mercenary. The figures are a mix of Castaway Arts and Newline Designs. Below the Ark of the Covenant receives an escort of chariots and Gibborim. The slingers at the bottom are Syrian/Canaanite figures by Foundry which could certainly pass muster in an early Hebrew army. 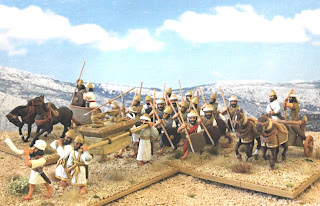 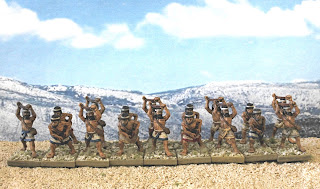