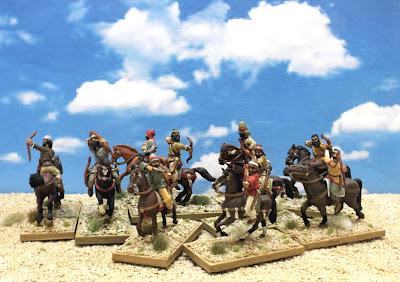 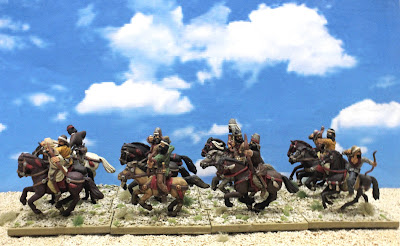 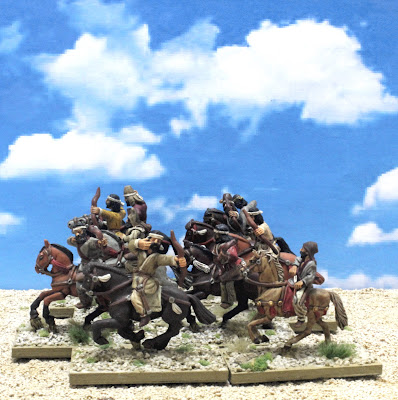 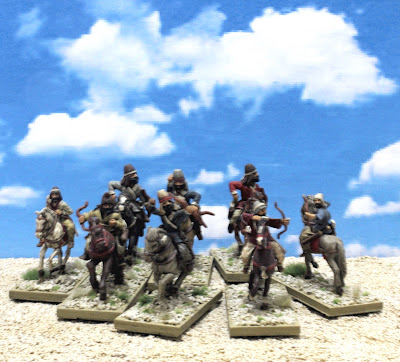 Here are some Parthian horse archers, cataphracts and baggage camels with guard. They're a real mix of ranges most of them painted years ago. I've just finished some more horse archers and cataphracts for some solo games I have planned, to bring the units up to strength.

I've been reading Warwick Kinrade's Soldiers of Rome rules which have just been released and I'm keen to try them out in a game. These are similar to his Soldiers of God rules which covers the Crusades. They're card driven for movement and actions but use normal dice for shooting, combat and morale.

They cover from the Gallic Wars through to the Marcomannic Wars with three basic lists - Romans, Barbarians and Parthians. The Barbarians actually include seperate lists for Britons, Gauls, Germans, Dacians and Cantabrians. I want to try a Cantabrian War (29-19 BC) game first with my Spanish and Celtiberians so will see how that goes. 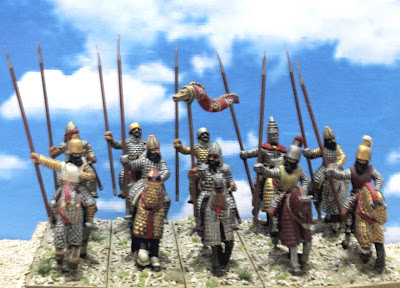 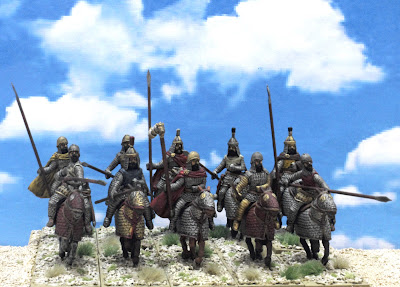 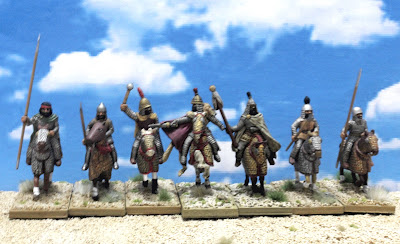 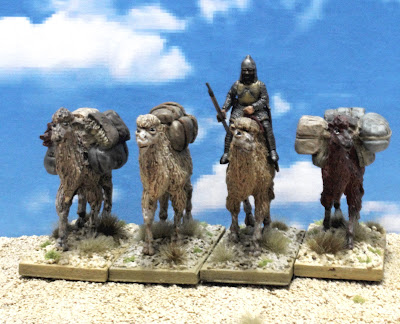 Earlier today I played a solo Command and Colors Ancients (CCA) game out in the shed. The scenario was the Battle of Utica in 240 BC, fought during the Truceless War, with Hamilcar Barca commanding the Carthaginians against the Mercenary Rebels under Spendius and Autaritas. This was a tough scenario for the Rebels, as they only had four command cards, compared to the Carthaginians who had six cards and moved first.

The Carthaginians played an Order Heavy Troops card in the first turn and quickly attacked the Rebel infantry with three elephant units. The ellies on the left flank got off to a flying start by rolling four hits and three re-rolls (not that they were needed) against the Rebel heavy infantry. They then made a momentum advance with a bonus combat against the Rebel medium infantry. The other ellies were not so lucky and the Rebels fought back, eventually destroying all three Carthaginian elephant units. 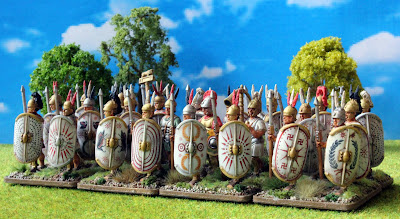 Here are some Italian allies from the 2015 Satrap Miniatures archives. These figures are all from the Victrix plastic box set Rome's Italian Allied Legions with Victrix shield transfers. 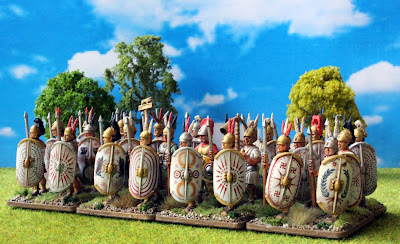 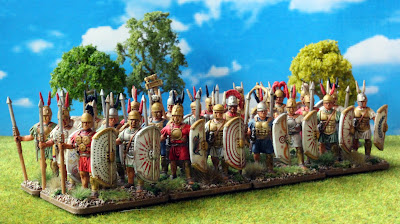 Command and Colors Ancients with 28mm Figures and Smaller Scales

Kevin suggested I do a post about playing Command and Colors Ancients (CCA) and the mats, figures, units and special rules that I use (mainly 28mm figures but also smaller scales as well). I thought this was a good idea, as it is a very popular board game and it really does look much better when played with figures and terrain. One of the great things about CCA is that there are literally hundreds of historical scenarios available:

If you don't like a particular scenario interpretation or feel that it isn't accurate then they are easily modified. If you have the time it is good to play a scenario twice and swap sides, as many scenarios are not evenly weighted and naturally favour the historical winner.

I have two Hotz felt mats with five inch hexes that I use, one is a desert brown mat and the other is a green field mat for European battlefields. The Hotz mats are based in Canada and have options for hex size and sector size, check out their website:


There are quite a few other options for purchasing CCA mats, Tiny Wargames the Battlemat Company have a big range of cloth and mousemat mats with two to six inch hexes and also do custom mats:

An alternative, if the price of mats (and the postage!) is a bit too much, is to make your own. There is an excellent post, a tutorial on Aaron Bell's Prufockian Gleanings blog on how he made his own mat:

For 28mm figures the five inch hex comfortably fits a four by four square of 80mm with sixteen formed infantry figures (HI, MI, Warriors and Auxilia) based on 20mm by 20mm square frontages. My figures are based in fours, threes, twos and individually and are then put on 80mm square movement trays that I make out of mdf, balsa and magnetic rubber steel. The movement trays speed things up when playing and I use casualty markers until the final casualty, when the tray is removed. I also have 80mm by 40mm movement trays made by a laser cutter that I use for ADLG and MeG and two of these joined together make an 80mm square frontage.

For Light Infantry I tend to have them staggered in two ranks of four, eight in total but sometimes will just use sixteen light infantry figures, it doesn't matter as long as you know what they are. For cavalry I use similar sized movement trays but with a 75mm width by 100mm depth. The Light Cavalry are probably better as four figure units but again it doesn't really matter as long as you know what they are. For Elephants and Light chariots I like to use two models on 60mm by 80mm bases that just fits in the 5 inch hex. For Heavy or Scythed Chariots I use a single model on a 80mm square base. Commanders are better based individually, usually on a horse (25mm by 50mm base) as they can fit within the hex if they're attached to a unit but I also use double figure commands on 60mm circular bases, it's not usually a problem.


For other scales the 5 inch hexes still works well, for 15mm you can have four bases or elements of 40mm frontage. For 10mm and 6mm the bigger units look great and the smaller scales make it a lot easier to fit in nice buildings and terrain. However a smaller hex size and figure size can be a useful option and I've been recently pondering if 15mm with smaller hexes is the way to go for CCM which uses a wider and deeper board (13 hexes wide by 11 hexes deep).

I really like the special rules that some of the scenarios have. Last year we played the Battle of Sentinum and the consul Decius Mus sacrificed himself by 'devotio' in order for his troops to win the battle! These special rules can really add historical flavour to a scenario as long as they're not too cheesy or elaborate. One of the criticisms of CCA is that there is no facing for troops and that a flank or rear attack is not as effective as it should be. While this doesn't personally keep me awake at night, you could experiment with house rules and give bonus dice to the attackers were this is clearly the case. If they're completely surrounded they're probably not going to survive for long with any flags rolled.

One of the new rule features that I really like about CCM is the Parthian Shot special rule for Light Bow Cavalry this gives them the option of evading two hexes if they survive any hits (unit symbol only) and shooting two dice as they evade (only unit symbol hits). I'd like to try this out in some CCA scenarios with horse archer armies like the Scythians and Parthians.

The special rules and scenarios in CCA, are just an interpretation of a historical battle. The major battles in the expansion sets have been researched and heavily play tested but with some of the more obscure battles, there is very little that is actually known about them for certain. Some of the scenarios developed on the website have been by volunteer gamers who may have limited historical knowledge of a period. So if, after reading the sources and conducting your own research, it still doesn't seem historically accurate or feasible to you, don't be afraid to modify a scenario or special rules.

Last Sunday Garry and I met down at the Vikings Club in Lanyon, for a 3500 points Pacto (small) game of Mortem et Gloriam (MeG). We diced for sides and I got the New Kingdom Egyptians, and Garry, the Hittites. The Hittite attackers were out scouted, so deployed part of their force first. It was Garry first game and only my third game so we were fairly slow working things out. Both armies advance cautiously and then the Hittite infantry charged in the centre and the  Hittite chariots charged the NKE chariots on their left flank. The NKE archers and chariots were ineffective with their shooting and before long were suffering at the hands of the Hittites in combat.


The NKE chariots on the right flank were destroyed and their commander killed in combat. On the NKE left flank the chariots charged the Hittite skirmishers who skirmished in response and easily got away. In the centre casualties were mounting for the NKE, a commander was killed and a Kill a Base (morale) test saw further wounds inflicted. Only the Sherden and Lukka put up much resistance and the Hittites did lose the odd base and a commander. It was all over for the NKE as it was only a matter of time before both centre commands routed. 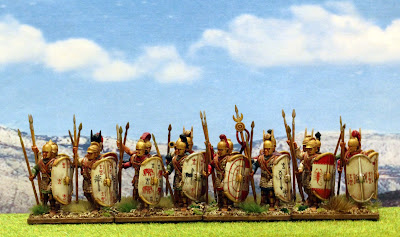 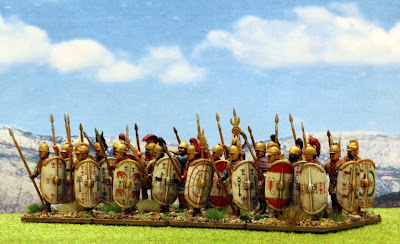 Here are some Carthaginian Veterans from the archives. These are all Victrix Miniatures figures with Victrix shield transfers, from the Warriors of Carthage plastic set. 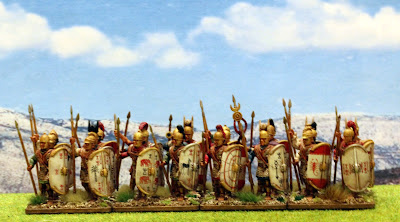 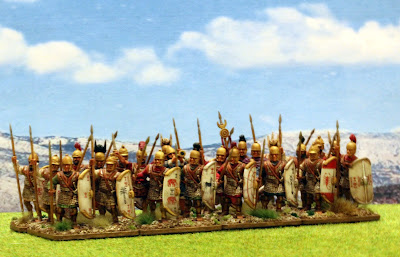