Earlier today I played a solo Command and Colors Ancients (CCA) game out in the shed. The scenario was the Battle of Utica in 240 BC, fought during the Truceless War, with Hamilcar Barca commanding the Carthaginians against the Mercenary Rebels under Spendius and Autaritas. This was a tough scenario for the Rebels, as they only had four command cards, compared to the Carthaginians who had six cards and moved first.

The Carthaginians played an Order Heavy Troops card in the first turn and quickly attacked the Rebel infantry with three elephant units. The ellies on the left flank got off to a flying start by rolling four hits and three re-rolls (not that they were needed) against the Rebel heavy infantry. They then made a momentum advance with a bonus combat against the Rebel medium infantry. The other ellies were not so lucky and the Rebels fought back, eventually destroying all three Carthaginian elephant units.

Here's a quick post from the archives today - Boudicca, Queen of the Iceni and one of her chieftains in a chariot. This... 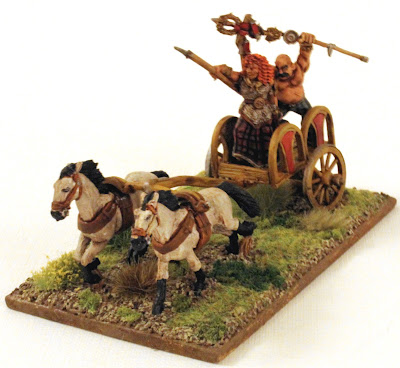