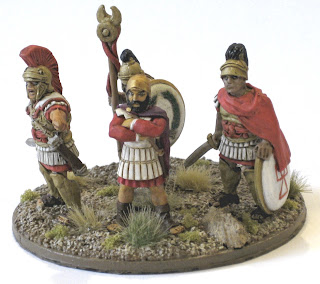 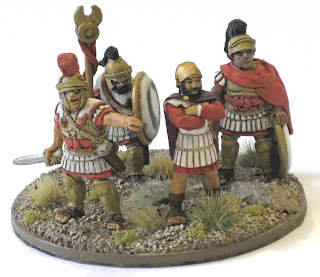 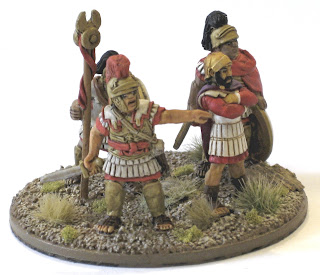 Here's a Carthaginian command stand that I've just finished painting. The Hannibal figure with folded arms is by Xyston and the other command figures are by A&A. The A&A command figure pack includes a Hannibal figure and comes with two identical mounted (see photo below) and foot figures. I have at least five Hannibal figures, one on an elephant (Relic), one mounted with a standard bearer (1st Corps) and these three here! 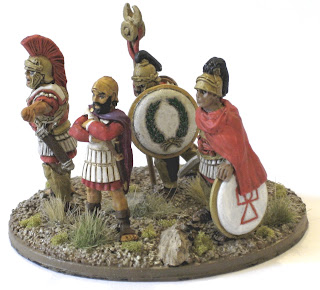 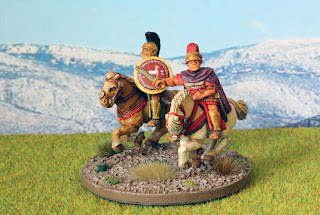 Email ThisBlogThis!Share to TwitterShare to FacebookShare to Pinterest
Labels: A & A Miniatures, Carthaginians, Hannibal, Xyston Miniatures

Last Wednesday afternoon I went over to Rick's place and we played a 160 points Never Mind the Billhooks game. Rick commanded the Lancastrians and I commanded the Yorkists.  It was his first game with these fun rules, and only my third. After some initial manoeuvring we got stuck in and started on the play deck cards.

The Lancastrian forces on the left flank quickly got the upper hand and routed the Yorkist light horse and crossbowmen. The  Lancastrian knights were badly shot up by the Yorkist archers and the survivors limped behind a hill to play no further part in the game. In the centre the infantry advanced and the obligatory archer duel commenced, with the Yorkist foot on the receiving end of some withering fire.

Email ThisBlogThis!Share to TwitterShare to FacebookShare to Pinterest
Labels: Never Mind the Billhooks, War of the Roses

Last Thursday afternoon I played a solo Second Punic War, Pacto sized Mortem et Gloriam (MeG) game, out in the shed. It was early days with Hannibal in Italy (218-216 BC). The battery in my camera died at the start of the game, so the only photos I took were right at the beginning and right at the end. I haven't played a MeG game for a while and made some silly basic mistakes but by the end of the game was getting the hang of it again. 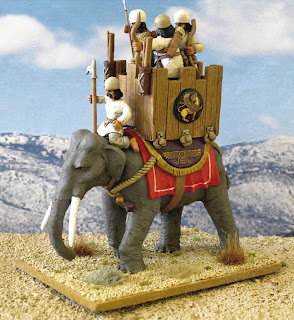 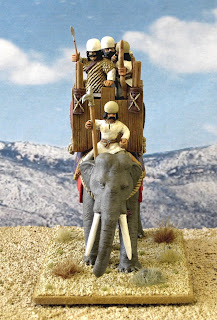 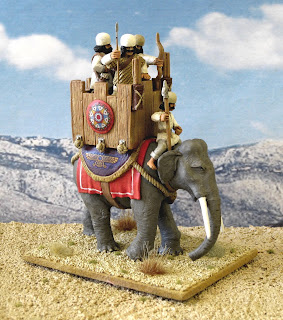 Here's a Sassanid elephant and infantry that I've just finished painting. The ellie and crew are by Aventine Miniatures, although the mahout is actually A&A as I couldn't find the original Aventine mahout. The shield transfers and ellie blanket are by LBM. The Sassanid spearmen are all A&A with replacement shields I bought from Phil Hendry years ago. The larger version of these shields is available from Aventine. The archers are a mix of Aventine and A&A with a single Vendel Mede archer with a globe hat. 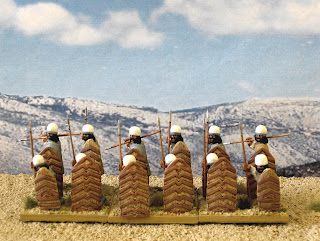 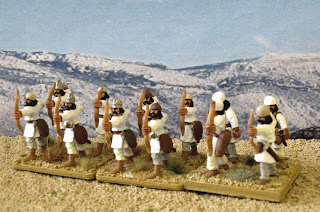 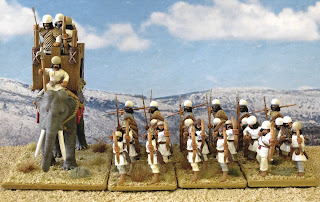 Battle of Clastidium 222 BC - Command and Colors Ancients Game

First post and game for the New Year! Last Monday afternoon I played a solo Command and Colors Ancients game out in the shed. The scenario was the Battle of Clastidium with a mainly cavalry force of Romans under Marcellus fighting a Gallic force of Insubres and Gaesatae under Britomartus/Viridomarus. For the background on the battle see the post: https://bucellarii.blogspot.com/2020/11/republican-roman-cavalry-and-leves.html
I wanted to incorporate the single combat between Marcellus and Britomartus in the scenario and did this by giving, Marcellus three wounds and Britomartus two, with two dice each in combat, hitting on leader and sword symbols. The victor would gain a victory point for killing their opponent, as well as depriving the enemy of a leader.
In my game Marcellus was victorious but wounded and joined a cavalry unit in the centre. The Gauls had four command cards to the Romans six and no leader, after Britomartus was killed. The scenario for the battle, if anyone is interested, can be found on the Command and Colors Ancients scenario list site:
https://www.commandsandcolors.net/ancients/maps/59-celtic-war-225-222-bc/256-203-clastidium-222-bc.html
The Romans had a couple of Order Medium Troops cards which proved very handy for their five medium cavalry units. In the end the Romans won fairly easily 5-0 victory points. The Gauls never really got going and their most effective troops, the Gaesatae, had limited opportunities for combat. However a couple of the Roman cavalry units were only one block away from being destroyed, so the result was closer than it seemed.
at January 05, 2021 14 comments: