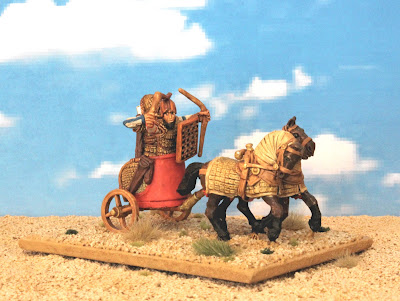 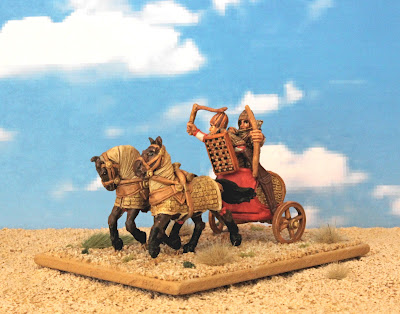 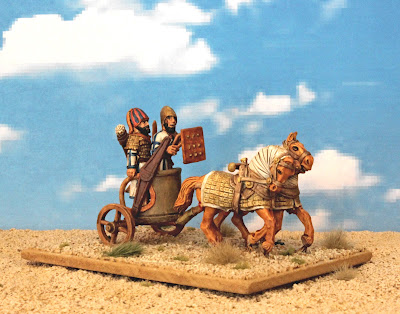 Here are some Hurri-Mitannian Maryannu (noble chariot warriors) that I've just finished painting. The figures are by Wargames Foundry. I already have some painted archers, javelinmen, slingers and Syrian chariots that I can use with this army, so a couple more chariots and some units of spearmen and I should have enough figures for a Chariots Rampant game. Cutting Edge/Warlord make some nice figures for this period so I will use these along with the Foundry figures. 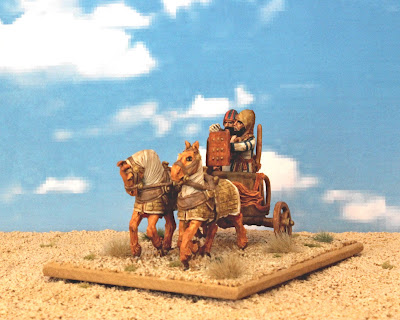 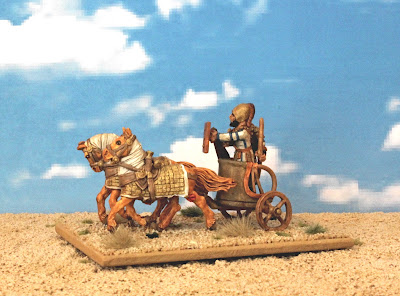 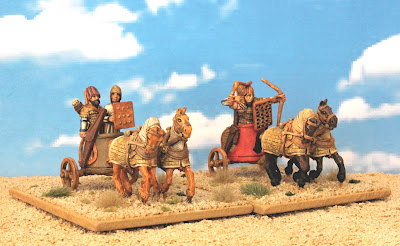 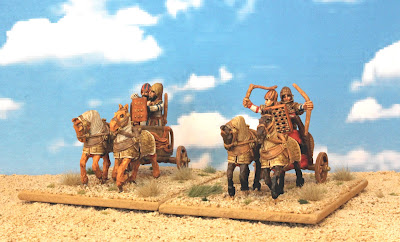 Yesterday afternoon in our shed, I played a solo 32 point Chariots Rampant game with Sea People raiders versus Mycenaean defenders. The scenario was a lot of fun, the hammer and anvil one, with the Sea People raiders trying to exit on the far table edge while the Mycenaean defenders tried to prevent them. In the end the Sea People destroyed most of the Mycenaean units and had command of the table with only one unit and their leader destroyed. The Mycenaean still had a unit of spearmen, archers and slingers but had lost both chariot units, their leader and a unit of spearmen.

The Sea People proved too powerful in combat, they were all Fierce Foot with the Sherden Warriors, Expert with upgraded stats. In retrospect the splitting of the Mycenaean forces worked to their disadvantage, the slingers were not very effective and the archers didn't fire a shot the whole game! I'd like to try this scenario again but think the Mycenaeans would have been better off with two more spearmen units rather than the missile troops. 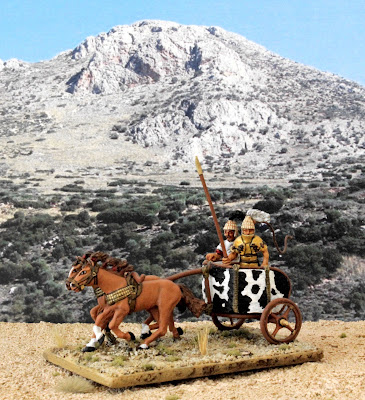 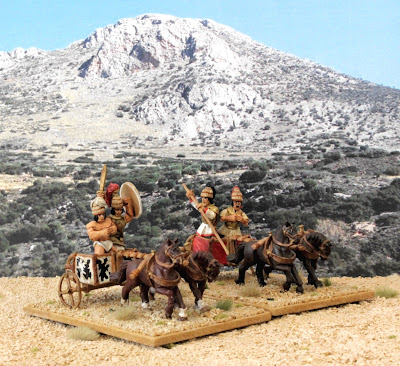 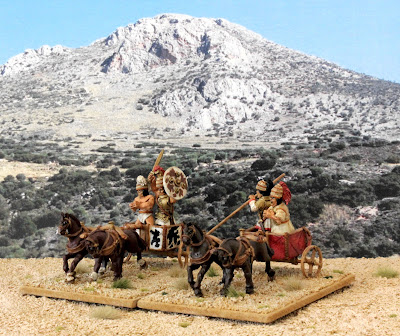 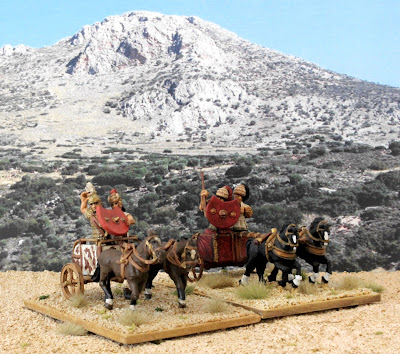 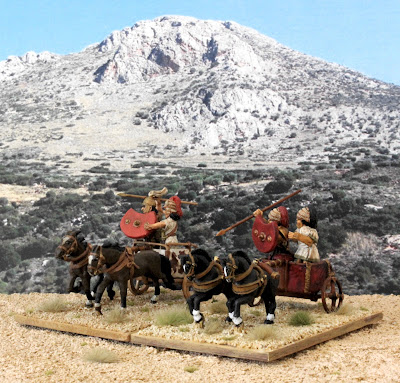 Here are some Mycenaeans, Achaeans or Bronze Age Greeks. Most I've just finished painting but some I painted years ago. Apart from the first photo, of a box chariot with charioteer in Dendra armour, most are mainly later types. The figures are a mix of Eureka Miniatures, Wargames Foundry, Redoubt Miniatures, Cutting Edge Miniatures/Warlord Games and Old Glory Miniatures. I plan to eventually create four forces with two sides of early and later Mycenaeans but will initially use them for Chariots Rampant, the Bronze Age variant of Lion Rampant.

The two infantry units in the photos below have a mix of round and upright pelta type shields. In fact the upright pelta type shields should really be reversed as depicted in the Warrior Vase from Mycenae, although it is possible that these shields were used in this way. Some of the shields are cast on the figures and others I couldn't face pulling off the completed figures, reversing them 180 degrees and then gluing them back on. Future units will have a mix of round and reversed pelta type shields but I suspect not too many opponents will care one way or the other! 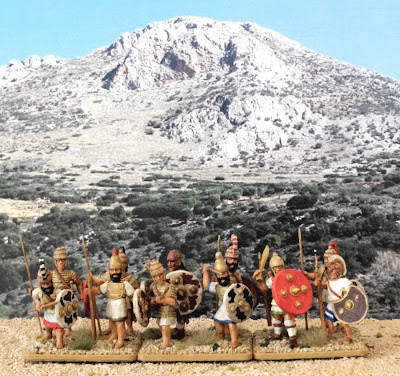 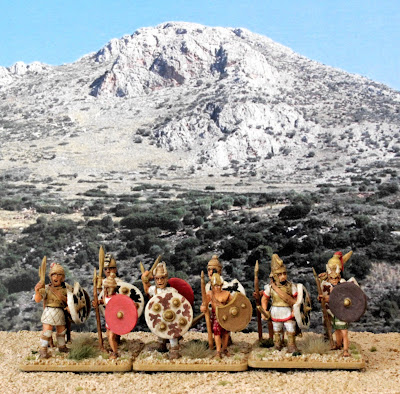 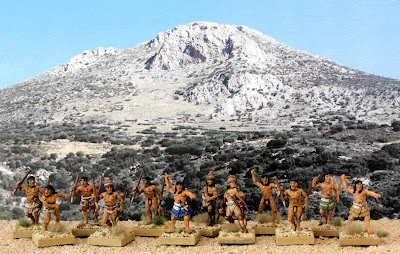 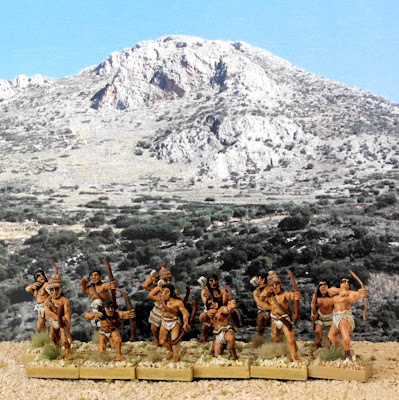 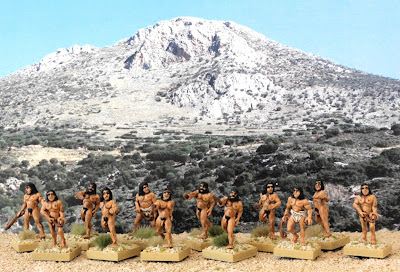 
Last Sunday a week ago Craig, Garry and I played two games down at the Vikings Club. The first of these was New Kingdom Egyptians, commanded by Craig, versus Sea People, commanded by me, in a Basic Impetus game. This was over fairly quickly and was a bit of massacre of the Sea People, they didn't manage to put up much resistance at all. The second game was a Dark Ages Lion Rampant game with Late Romans versus Early Saxons and I will put photos of this game in a separate post. I've been off line for a while with computer issues so haven't been able to post anything in this time. 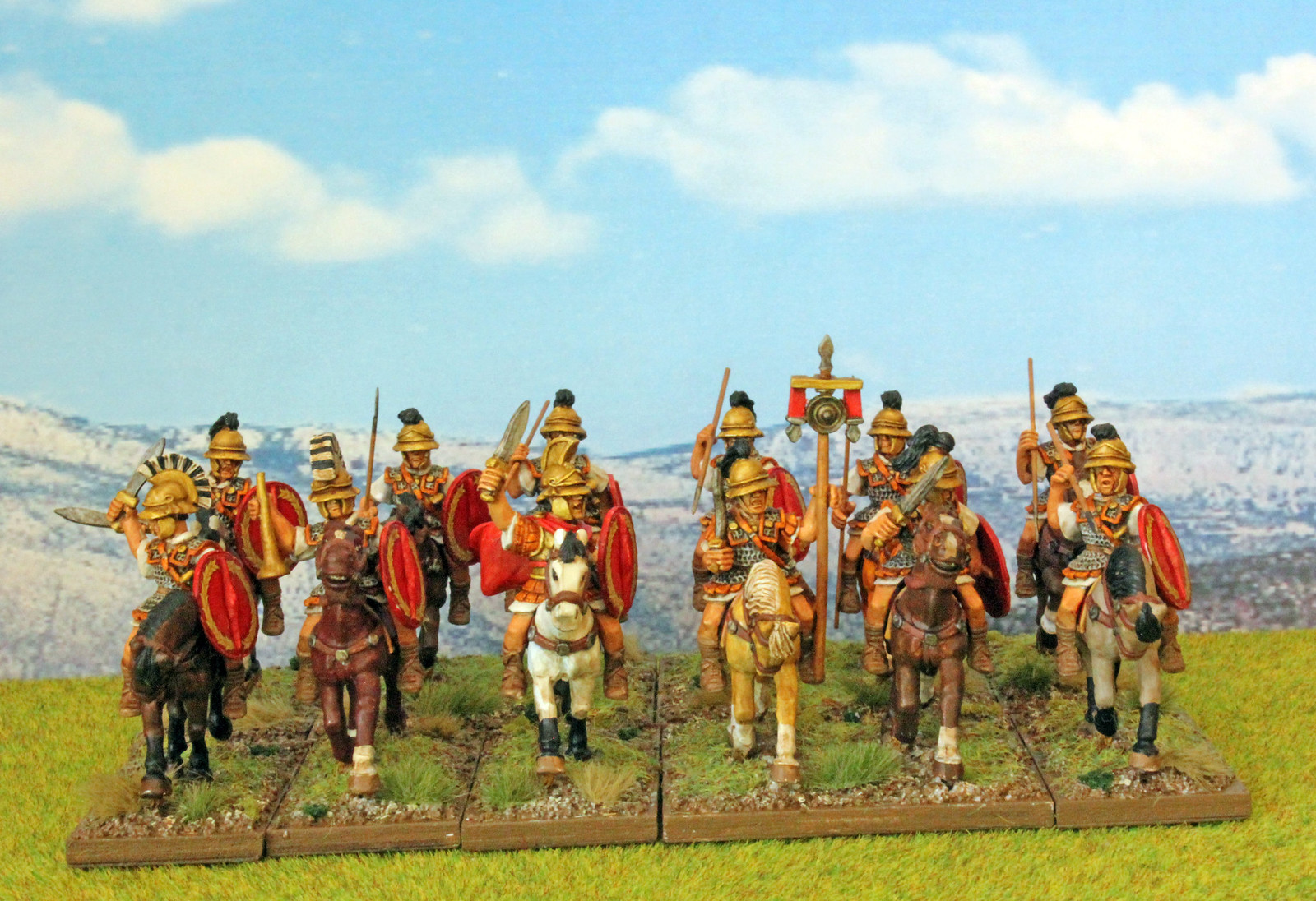 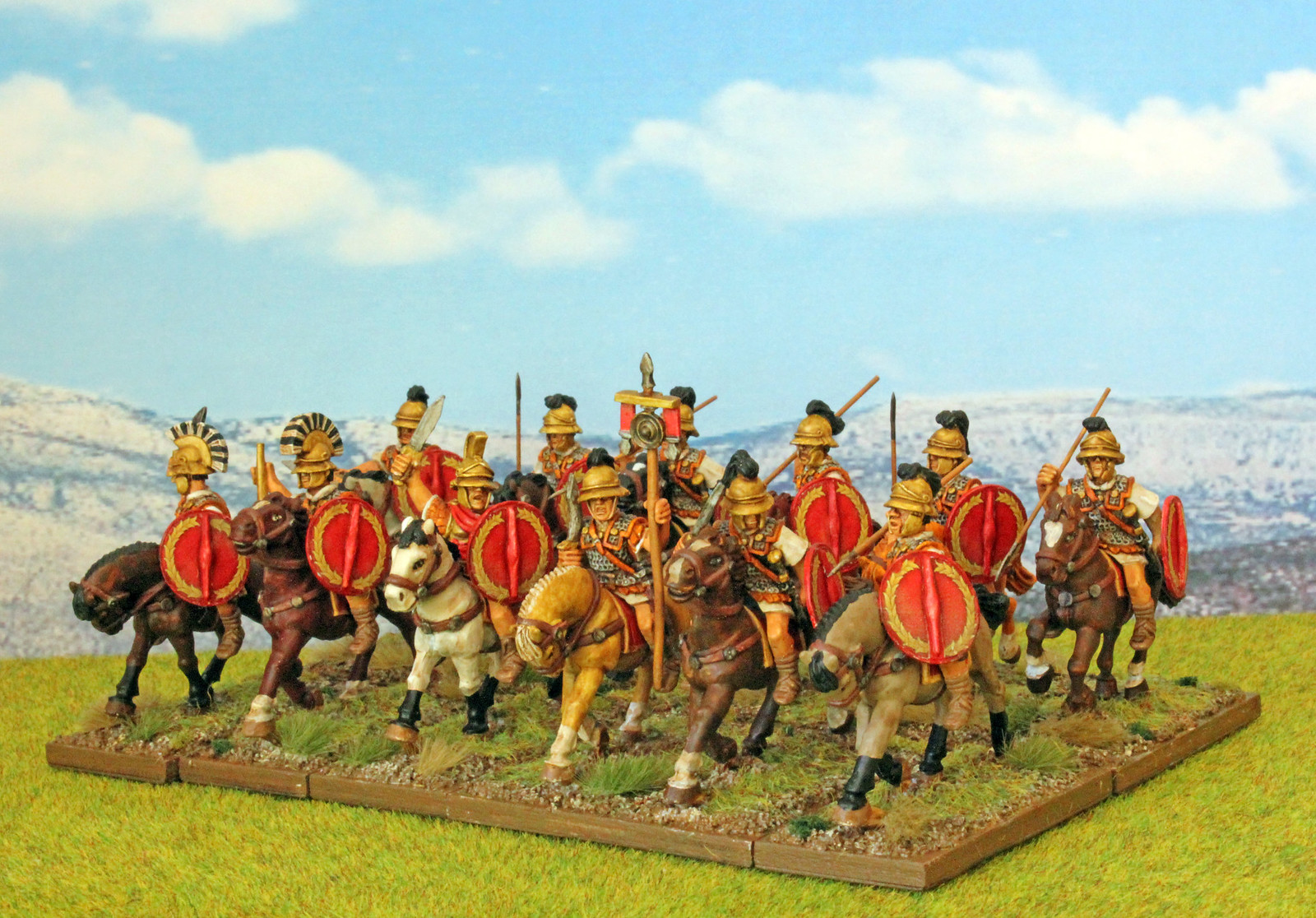 Here are some Republican Roman cavalry I painted last year. The figures are by Aventine Miniatures with LBM shield transfers. Like a lot of people I'm really looking forward to the Justinian Byzantines that Aventine and Footsore Miniatures are releasing later this year. 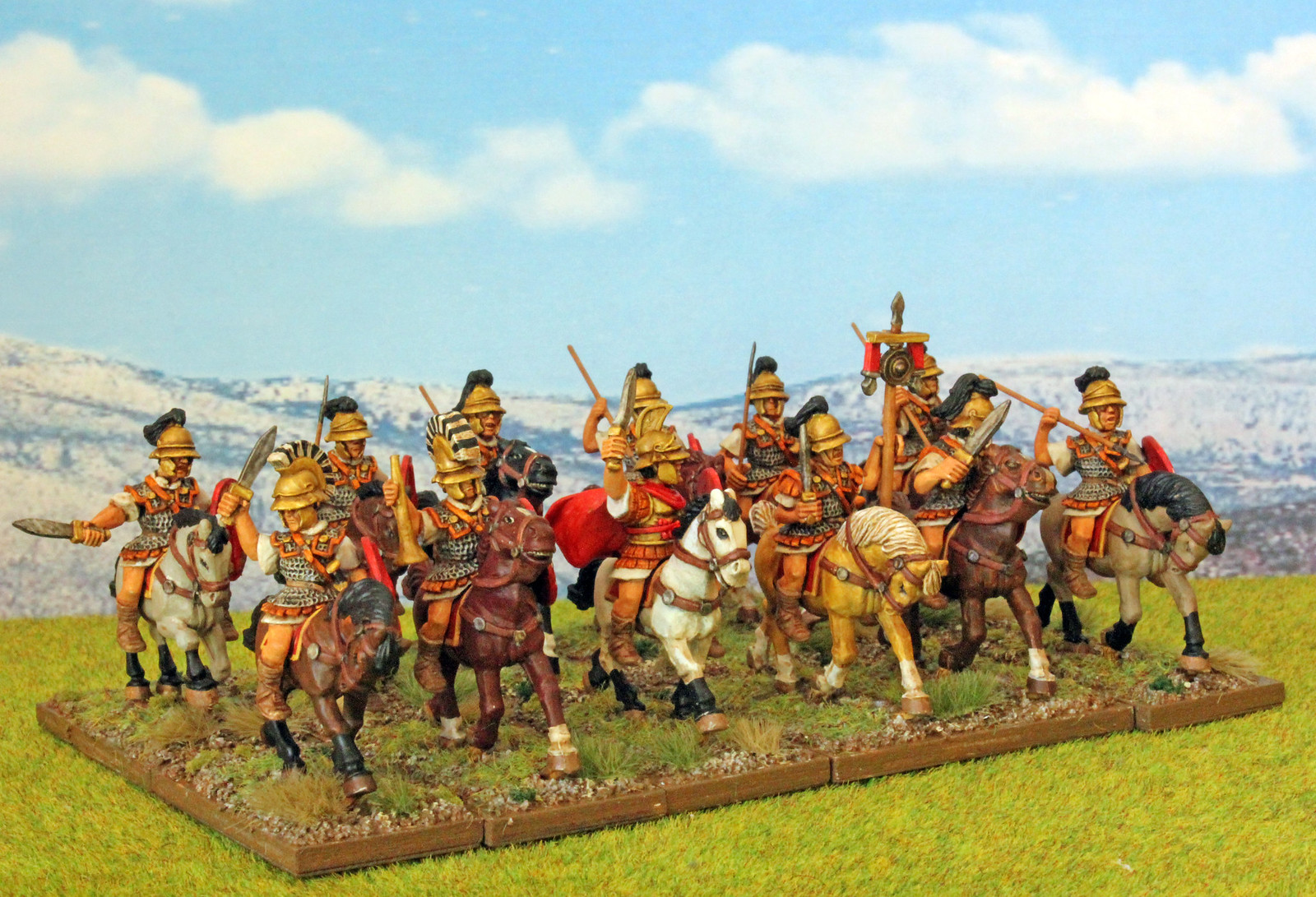