Last Sunday Craig came over to my place and we played a Dux Bellorum game with a frontier raid scenario. The scenario, Crossing the Bar by Dan Mersey is in Wargames, Soldiers and Strategy Issue 95 (pp. 51-53), and involves a raiding party trying to exit the table, while the defenders attempt to stop them by defending two fords and a bridge. Additional reinforcements arrive for the defenders on consecutive turns. We played it earlier in the week at the club with my Goths and Craig's Late Romans, and it ended in a close draw. In our game on Sunday we swapped sides but Craig forgot his early Saxons so we were both using Late Roman figures. This time it was also close through out, but in the end the raiders were able to make a break through to just edge ahead. 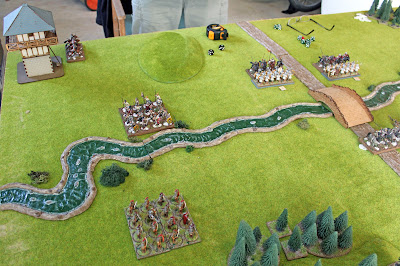 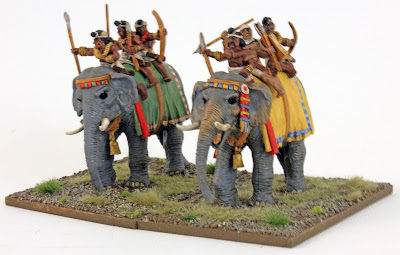 This is my first post on my new ancient wargaming blog - Bucellarii. I used to have a blog, Satrap Miniatures, but deleted it with my Photobucket account at the end of last year. I expect this will be fairly similar in content and I will repost some of the more popular posts from it.  I'm still sorting things out and seem to have forgotten everything about the layout and formatting of blogger!

These figures are Old Glory elephants and crew that I've just finished painting for my Indian army. I'm working on some Indian chariots at the moment but in my usual magpie fashion keep get distracted by other figures and armies...
at April 23, 2018 No comments: