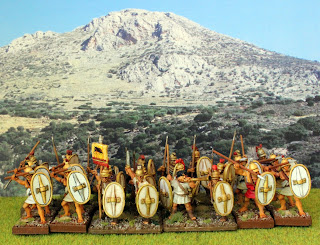 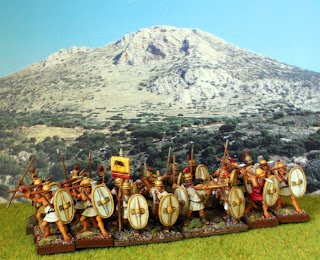 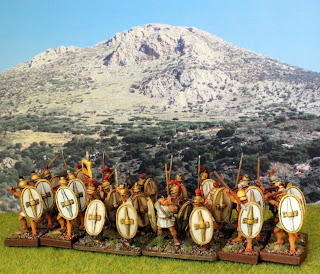 Another post from the archives, two units of thureophoroi, with LBM banners. The figures are a mix of Wargames Foundry, Crusader Miniatures and Old Glory Miniatures and were painted about five years ago. 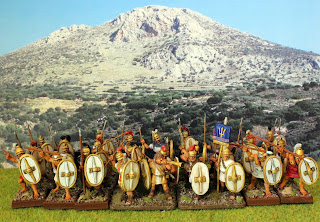 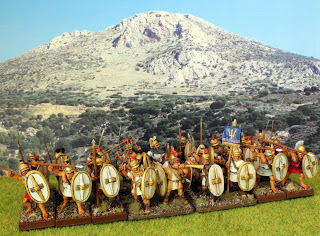 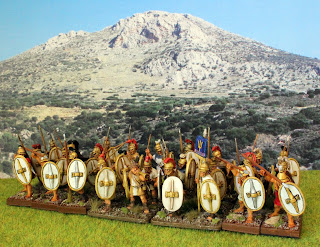 Last Saturday afternoon Craig came over to my place and we played a Romans versus Carthaginians, Age of Hannibal Saga Game. I haven't played Saga for a couple of years but did pick up the Age of Hannibal book and $$$ dice when they were released last year. Craig has been playing a fair bit of Saga and won the Dark Age Saga comp with his Normans at CoronaCon which was held here in Canberra on Australia Day. Our game was six points a side with six turns.

I had Numidian cavalry and Balearic slingers and tried to wear the Romans down with shooting. This had limited success. Even when my elephant charged the Velites it didn't inflict as much damage as I hoped. The Romans have some very powerful abilities on their battle board and Craig used these to good effect. Not being too familiar with Carthaginian battle board, my use was fairly limited, mainly activation and resting of units. It was a fairly close game but once the Romans killed the Carthaginian warlord it was all over, with the Romans victorious 20-16 points.

Last Friday afternoon I played a solo Parthians versus Mauryan Indians, Pacto sized Mortem et Gloriam (MeG) game out in the shed. I was a few bases short with the Parthian cataphracts, so used some of my Sassanids to make up numbers and used some Persians for the Parthian hillmen infantry. After some desultory shooting, the armies finally closed. The Parthian cataphracts proved to be effective and made short work of the Indian archers in the centre when they managed to get in a flank charge. The Indians soon broke providing the Parthians with an easy victory.

Sassanid Command - Shapur I and Valerian 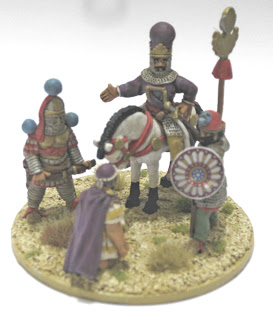 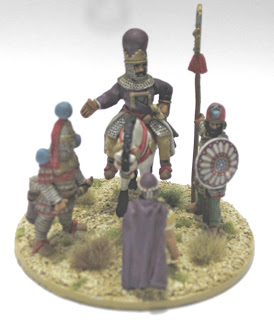 Here's a Sassanid Command stand of Shapur I and Valerian that I've just finished painting. These are great figures by Aventine Miniatures, who have some fantastic ranges, including easily the best ancient elephants in 28mm. 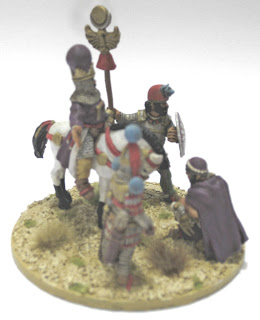 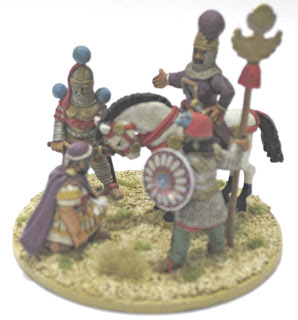 On Saturday afternoon Craig came over to my place and we played a Lion Rampant Crusader States game with my Fatmid Sudanese warband taking on his Syrian States one. The Syrian cavalry made the most of their superior fire power and had the Sudanese in trouble from early on in the game. The Sudanese casualties slowly but surely mounted. A rare highlight for the Sudanese was when their light cavalry charged and destroyed a weakened Syrian medium cavalry unit with leader. This only proved to be a minor inconvenience for the Syrians, and their relentless shooting ensured victory.