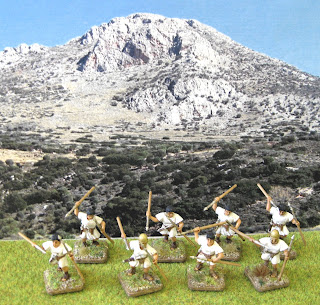 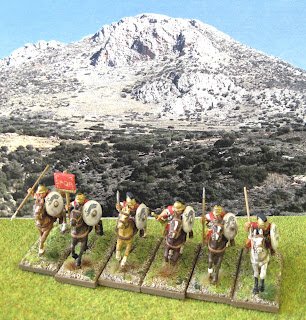 Here are some Republican Roman cavalry and leves that I've just finished painting. The cavalry are all Crusader Miniatures figures with LBM shield transfers and the leves are Victrix. I have a Command and Colors Ancients (CCA) game in mind for these troops, the Battle of Clastidium 222 BC, where the Roman consul Marcus Claudius Marcellus killed the Gallic Insubres chieftain, Britomartus/Viridomarus in single combat and won the spolia opima, one of the highest honours in ancient Rome. The Roman forces led by Marcellus consisted entirely of cavalry with a few hundred supporting light infantry (the leves).

Plutarch in his life of Marcellus (Parallel Lives) gives an entertaining description of the action:

7 1 Meanwhile the king of the Gauls espied him, and judging from his insignia that he was the commander, rode far out in front of the rest and confronted him, shouting challenges and brandishing his spear. His stature exceeded that of the other Gauls, and he was conspicuous for a suit of armour which was set off with gold and silver and bright colours and all sorts of broideries; it gleamed like lightning. 2 Accordingly, as Marcellus surveyed the ranks of the enemy, this seemed to him to be the most beautiful armour, and he concluded that it was this which he had vowed to the god. He therefore rushed upon the man, and by a thrust of his spear which pierced his adversary's breastplate, and by the impact of his horse in full career, threw him, still living, upon the ground, where, with a second and third blow, he promptly killed him. 3 Then leaping from his horse and laying his hands upon the armour of the dead, he looked towards heaven and said: "O Jupiter Feretrius, who beholdest the great deeds and exploits of generals and commanders in wars and fightings, I call thee to witness that I have overpowered and slain this man with my own hand, being the third Roman ruler and general so to slay a ruler and king, and that I dedicate to thee the first and most beautiful of the spoils. Do thou therefore grant us a like fortune as we prosecute the rest of the war."

4 His prayer ended, the cavalry joined battle, fighting, not with the enemy's horsemen alone, but also with their footmen who attacked them at the same time, and won a victory, in its sort and kind, was remarkable and strange. For never before or since, as we are told, have so few horsemen conquered so many horsemen and footmen together. After slaying the greater part of the enemy and getting possession of their arms and baggage, Marcellus returned to his colleague, who was hard put to it in his war with the Gauls near their largest and most populous city.
http://penelope.uchicago.edu/Thayer/E/Roman/Texts/Plutarch/Lives/Marcellus*.html 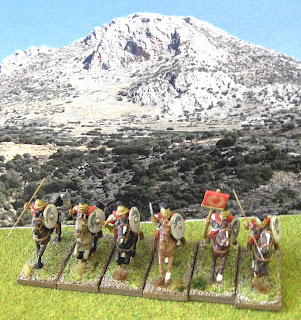 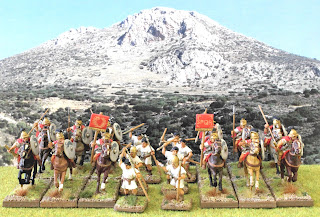 Last Monday afternoon I played a solo Lion Rampant:Crusader States game out in the shed. I used my Normans as Western Crusaders with a warband of 26 points and my Almoravid Moors as a Sudanese warband of 28 points under Fatimid Egyptian control. You get two extra points under the Fatimid Egypt list as you don't get the +1 leader within 12" bonus for courage tests. The scenario was the usual Bloodbath one, with the prize for the victor being supplies in the adjacent village. My game turned out to be very bloody indeed with the Sudanese narrowly winning.
There are a few changes to the terms used to describe troop types in the supplement. Mounted Men-at-Arms, Mounted Serjeants and Mounted Yeomen are now heavy cavalry, medium cavalry and light cavalry. Archers, Crossbowmen and Fierce Foot are still the same but Foot Men-at-Arms, Foot Serjeants and Foot Yeomen are heavy infantry, medium infantry and light infantry. Lion Rampant:Crusader States is beautifully illustrated and has chapters covering a brief history, new upgrades, twelve army lists, twelve detailed scenarios but the core rules are still the same. Highly recommended. 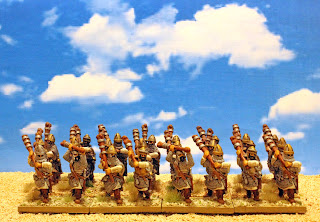 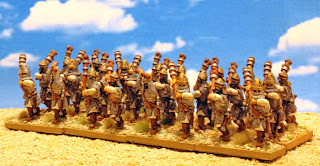 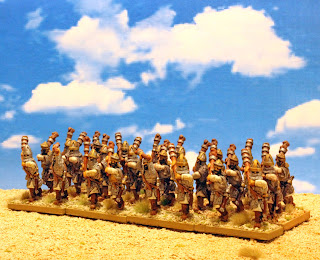 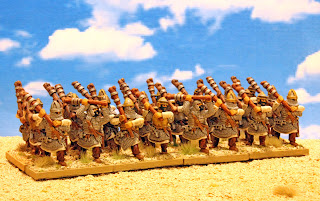 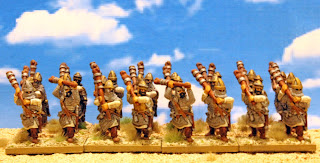 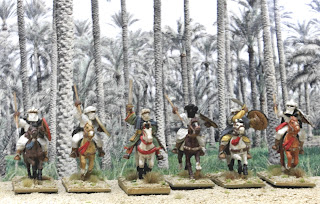 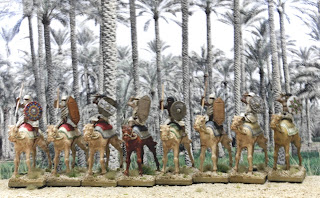 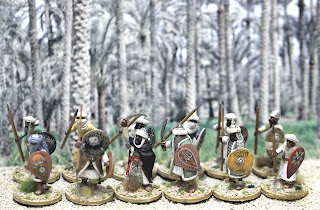 Here are some Almoravid Moors, mainly Gripping Beast figures (metal and plastic) with a few by Eureka Miniatures and Artizan Designs. I've just finished painting the cavalry and infantry units above, the rest were painted ages ago. Shield transfers are by LBM. I'm planning to use these as a Sudanese warband or retinue under the Fatimid Egyptian list in the new Lion Rampant: Crusader States supplement, so it will be interesting to see how they go. 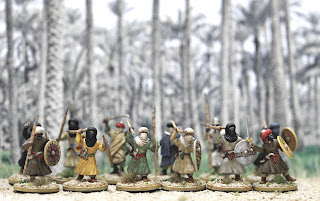 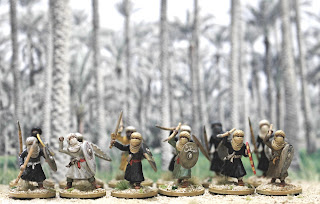 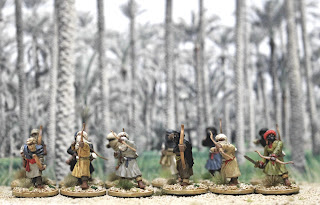 Battle of Carrhae 53 BC - Command and Colors Ancients Game

On Friday afternoon I played a solo Command and Colors Ancients game out in the shed. I'd just received my new Command & Colors Medieval mat with 11 x 13 five inch hexes from Deep Cut Studio, so I was quite keen to try it out in a game. The scenario was the Battle of Carrhae with Crassus taking on the Parthians under Surena.

The Romans deployed in a hollow square and had five command cards to the Parthians' six. I used the Parthian shot rule for light bow cavalry from the Command & Colors Medieval game but reduced it to one dice rather than two when evading. This turned out to be quite a hard fought and close game with the Romans giving a good account of themselves. In the end the Parthians won 7-5 victory points.