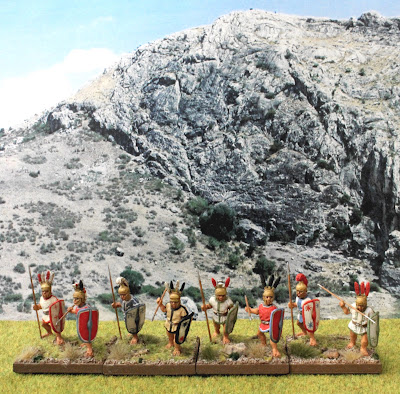 Here are some Samnite and Apulian javelinmen that I've just finished painting. While they're only two skirmisher units for my Samnite army, they took a fair while to do as there's quite a bit of work in the tunic and shield designs. They are all Crusader Miniatures figures.

It's been very quiet on the gaming front lately but I have managed four games of Battle Ravens this month and received in the mail yesterday reinforcements with my Norman and Welsh armies. I'm looking forward to trying these out and some of the other optional rules with varied deployment, reserves, today the sheep fend for themselves and dice variants - Valhalla Dice and Thor's Dice. It's a really great game, it only takes about an hour to play and I think I've already got my money's worth! 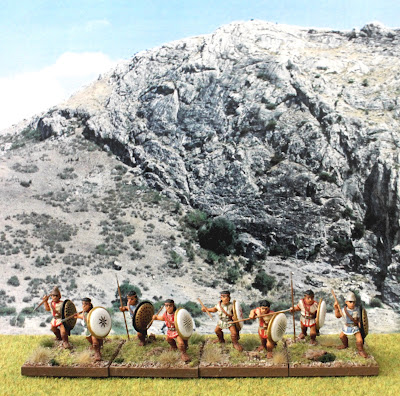 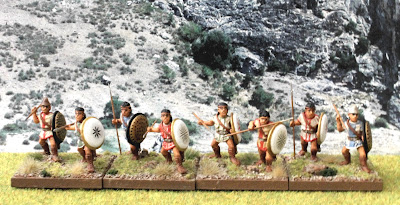 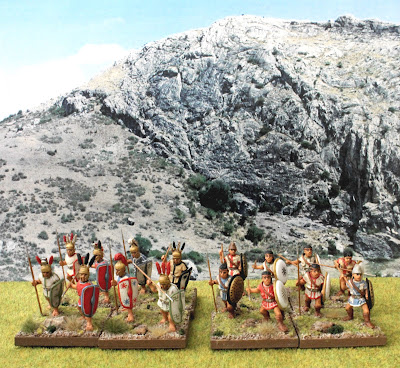 First Game of Men of Bronze

Yesterday in the mail I got my copy of the new Osprey skirmish rules, Men of Bronze Ancient Greek Hoplite Battles, a day before its official release. I've really been looking forward to these rules, as I have numerous armies for the period (Marathon to Chaeronea) and they are based on Dux Bellorum, my favourite dark age rules. After reading the rules I was disappointed for a variety of reasons but decided to try them out with a solo 38 point game with Spartans and Athenians of the Peloponnesian War meeting in a decisive battle.

One of the things I found confusing about rules was the measurements in base widths as Hoplite units move 6 base widths which is doubled to 12 when charging. In Dux Bellorum the standard infantry move is 2 base widths or 3 for impetuous warriors charging. I think this refers to a single base width as all the figures in the photos are 28mm based on single circular 25mm bases, so in effect a single base width equals 1 inch and this is what I went with in my game.

The Spartans had three hoplite units (2 Elite and 1 Drilled) and two units of Helot Psiloi. The Athenians had three hoplite units ( 1 Elite, 1 Drilled and 1 Militia) and two Peltast units. Both sides started the game with six Arete Points each (arete means excellence in Greek). These are similar to Command Points in Dux Bellorum and are used to bid for Initiative, charge, use a special rule, steal Initiative from your opponent, rally a Wavering unit and re-roll any one die.

In the centre the Spartans charged and the Athenians counter charged. The slogging match continued with units on both sides wavering and courage faltering. In the end two units on both sides bizarrely routed at the same time! A hoplite and skirmisher unit remained on either side, three units then failed their discipline tests, leaving a single wavering Spartan hoplite unit victorious.

I feel ambivalent about these rules but may try them again with Greeks and Persians or Thracians (Hill Tribe Barbarians). The last two army lists are very generic and seemed to have been added as an afterthought and do leave quite a bit to be desired in terms of historical accuracy. For me this is the main problem with this rule set and having major battles like Marathon, Plataea, Thermopylae, Cunaxa, Leuctra and Chaeronea reduced to skirmish game scenarios just doesn't really cut it. 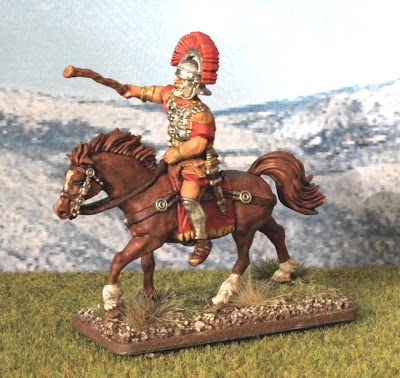 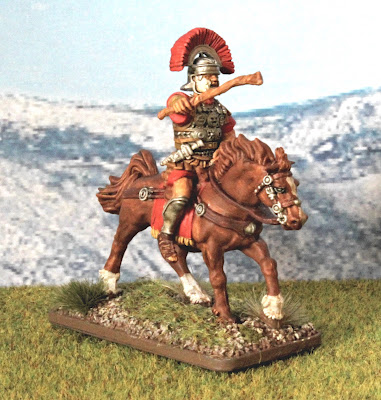 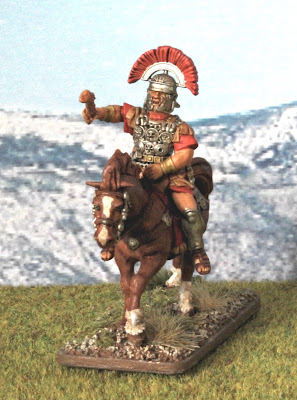 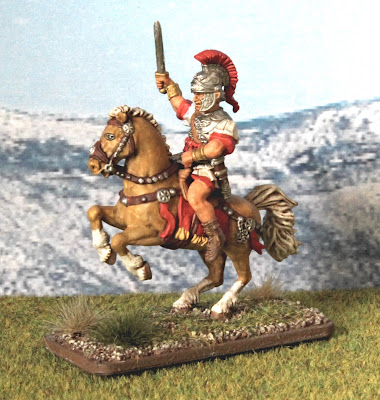 Here are some Early Imperial Roman command figures that I've just finished painting. These three figures are one sprue, from the new Victrix Early Imperial Roman Mounted Generals plastic set. These are great figures which made it record time from the UK. I think the mounted centurion is my favourite out of this lot. I have some Victrix EIR legionaries and auxiliaries to paint so hopefully the command will inspire me to get cracking on those. 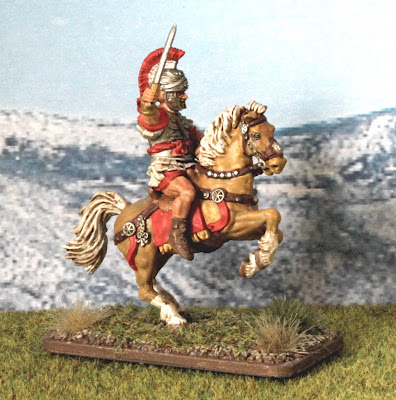 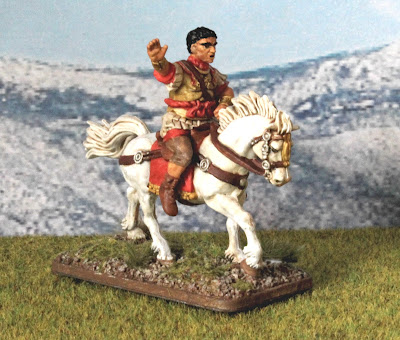 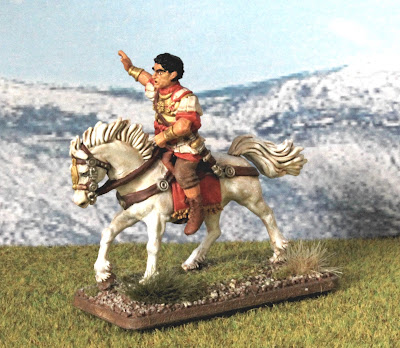 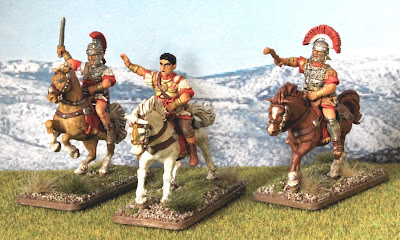 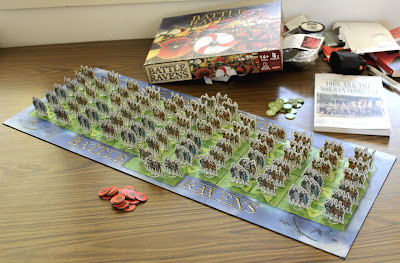 Last night we played our first game of Battle Ravens, the recently released shieldwall boardgame by Dan Mersey. It was really good fun - attrition in the shieldwall. I was the Norse and attacked repeatedly to little effect. The Scots were a little more canny and saved their Battle Ravens until the Norse used all of theirs, then attacked to greater effect. Each player starts with 20 Ravens and these are used to move, attack or defend individual units. The aim of the game is to break your opponent's shieldwall by capturing three of the six areas on the board. Attacks are rolled with normal dice and a 4 or 5 is a hit and a 6 a double hit with Hirdmen worth two hits and the Bondi one. Thralls allow you to reroll a failed attack. Blocking the attacks works in the same way.

At the end of the turn once both players have used all their Ravens you start again, returning Thralls to the board and players alternate placing Ravens. If a player has an area captured, with all units removed, the opposing warriors move into it and play no further part in the game. The losing player then removes a Thrall and three Ravens from their hand for each area captured. It proved to be a slippery slope for the Norse in our game and it wasn't long before the victorious Scots had easily captured three Norse areas. I'm looking forward to my next game and will try the Tactic Cards, which reflect the historical tactics, each army has ten of these and five are chosen randomly to use in a game.
at April 11, 2019 6 comments:


Here are some 15mm New Kingdom Egyptians, there are six elements to date, half of a DBA army to fight my 15mm Hittites. The figures are a mix of Essex Miniatures, Chariot Miniatures, Black Hat Miniatures and the mud brick building is by Hovels. The chariot and horses are old strip Minifigs and the standard bearer and driver are by Chariot Miniatures.