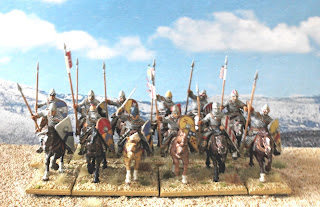 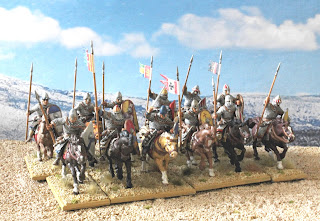 Here are some Early Crusaders from the Victrix Norman Cavalry plastic set that I've just finished painting. Shield transfers are by Victrix and banners are by LBM from the Norman lance pennants set. Great figures as you'd expect but really versatile too, with Norman, Early Crusades, Spanish and Andalusian options. I liked these so much I ordered another set to do as Spanish caballeros for my Reconquista army. 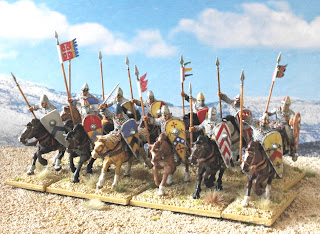 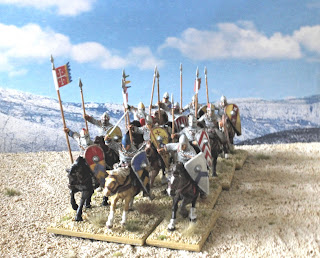 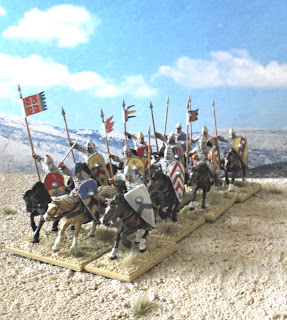 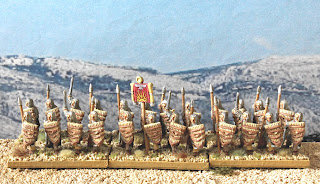 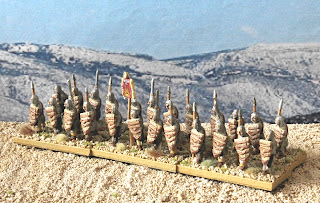 Here are some more Sassanid infantry that I've just finished painting for my 15mm Sassanid army. These are all Forged in Battle figures from their Sassanid heavy infantry pack with an LBM banner. These are really lovely, detailed little figures, more true 15mm than 18mm, that are just great to paint. I have quite a few more packs of these to paint, mainly Clibinarii and a pack of the Daylami hillmen. 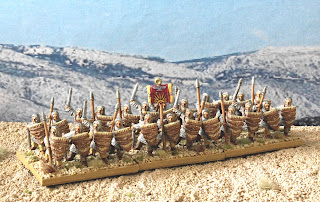 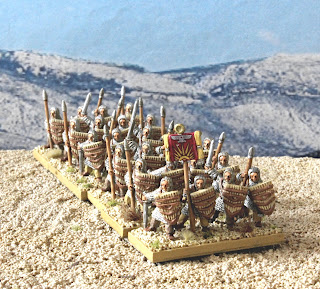 On Tuesday afternoon Craig came over to my place and we played a 200 point ADLG game with Normans vs Anglo-Danes. I was the attacker with the Normans, they advanced and the impetuous Milites charged, assisted by the Breton light horse on the left flank. The Greater Fyrd and then the Select Fyrd were rolled up on the Anglo-Danish right flank with some lucky dice. In the centre and on left flank the Huscarls slogged it out with the Norman spearmen and Milites. In the end we called time as the Anglo-Danish were almost broken (they were 21 breaking on 23) while the Normans were relatively unscathed (10 breaking on 21). It was a fun, quite prolonged game with these two armies, Craig had some terrible dice.

On Sunday I met Robert down at the Vikings Club in Lanyon for a 28mm MeG Pacto game of Spartans vs Athenians. I haven't played a game down here for over two years, since the start of the pandemic but it was good to see Ian and all the usual suspects there. Robert was the attacker with his Spartans and we ended up with a mountainous secure flank on the Athenians' right and a wood on the opposite side. We used a 6' x 4' mat with standard 60mm base widths for distances.

The Athenians were out scouted by 80% so had to deploy most of their army first. Both sides advanced quickly and we were in combat by the second turn. Casualties mounted and before long the Athenian centre was buckling under pressure from the Exceptional Spartan Hippeis. The Spartans burst through here and it was all over for the Athenians, with the Spartans easily winning 15-6. It was fun to get the hoplites out and play a game after such a long absence from the club. 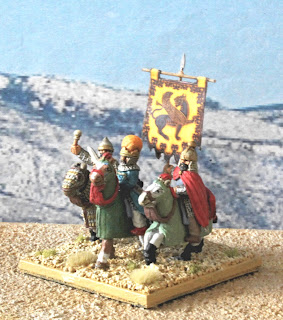 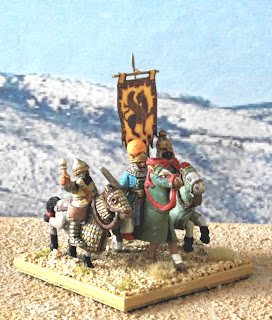 Here are two Sassanid Command stands for my 15mm Sassanid army, that I've just finished painting (I have a 28mm Sassanid army as well). The figures are by Legio Heroica and AB Figures with LBM banners. Apparently they're hard to use well in MeG, to make best use of their combined shooting and combat abilities, so no doubt it will be a steep learning curve with a few disasters on the way! Mainly cavalry armies have never faired that well in most rules I've played to date but you've still got to go with an army that appeals. 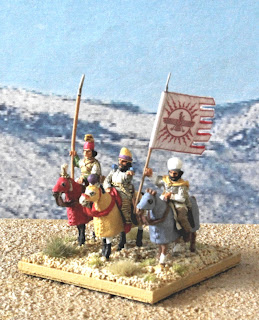 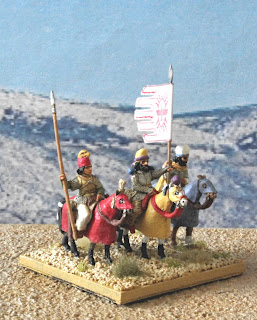 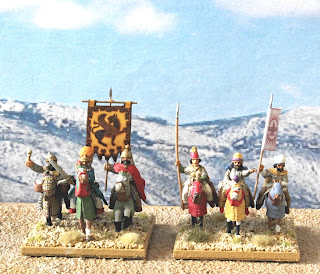