On Tuesday morning Craig came over and we played the last of our mid-week games before he goes back to work. This was a Never Mind the Billhooks game of 65 points with two commanders a side. Craig had a Yorkist force with two units of archers, one unit of men-at arms and one of billmen. I had a Lancastrian force with two units of veteran archers, two billmen (I used men-at-arms as I haven't finished painting my billmen yet) and a skirmisher unit of hand gunners.

We advanced to within firing range, exchanged shooting, then a Yorkist billmen charged my archer and billmen block on the right flank. The melee continued into a second round until the Yorkist billmen broke with their commander. A Yorkist archer unit also broke after failing their morale crisis test. We continued playing and the Yorkist men-at-arms with their Commander-in-Chief charged again and in the subsequent duel the Lancastrian Commander-in-Chief was killed. Rereading the rules I think the game was already decided, as the Yorkists had already lost four army morale tokens and had none left, but it was all good fun. Look forward to the next game!

Email ThisBlogThis!Share to TwitterShare to FacebookShare to Pinterest
Labels: Never Mind the Billhooks, War of the Roses 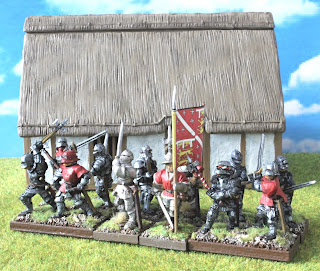 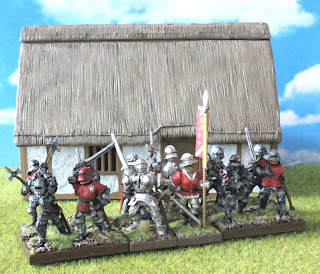 Here are some Men-at-Arms and hand gunners for the War of the Roses that I've just finished painting. Most of the Men-at-Arms are Old Glory and were painted a while ago but I've added a few Front Rank figures to the unit to bring them up to strength. The standard is from a Perry box set and is of John Howard the Duke of Norfolk, who led the Yorkist vanguard at the Battle of Bosworth and died there. The hand gunners are all Front Rank figures, they're Burgundian mercenaries but I haven't painted any livery badges on them. I bought these Front Rank and Old Glory War of the Roses figures years ago before the Perry range came out but have since bought many boxes of the Perrys. There's plenty of painting to do for both armies but the plan is to get enough units painted for Never Mind the Billhooks games as a starting point. 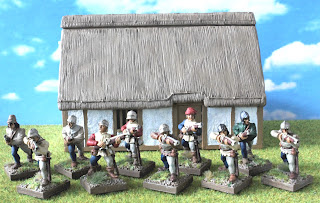 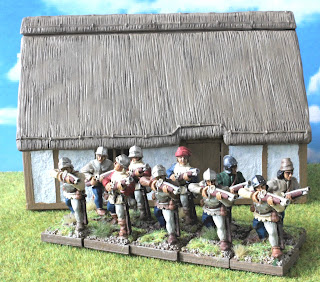 Last Tuesday afternoon Garry and I went over to Craig's place and we played a 8000 point Magna Mortem et Gloriam (MeG) game, with his Dacians taking on our Early Imperial Romans. It was a pretty big game and Garry had a hard time fitting all his troops on the table edge. We were pretty slow playing this, it was only Garry's second game, there were various distractions including visitors and neither of us are exactly experts on the rules anyway. The Dacian falx men charged the Roman right flank and soon the entire Roman army was engaged in combat. A highlight on the Roman left flank was when the Roman auxiliary cavalry broke the Sarmatian lancers. In the end we ran out of time and the game was a draw with both sides level pegging in broken units and casualties. 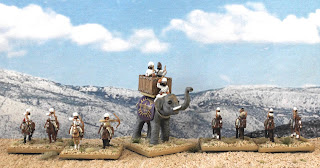 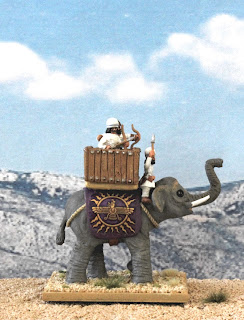 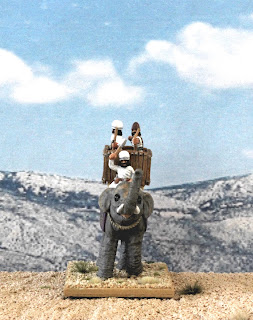 Here are a 15mm Sassanid elephant and some horse archers that I've just finished painting. The ellie and crew are by Legio Heroica, quite large and chunky compared to the other three I painted earlier in the year, see the comparison shot below. The blanket is from the LBM 15mm Sassanid banner sheet. The horse archers are a mix of AB Figures and PSC. 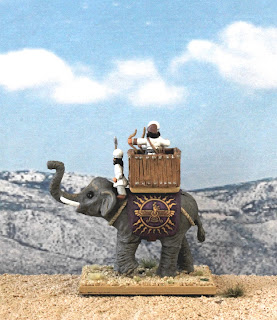 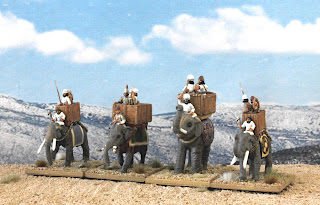 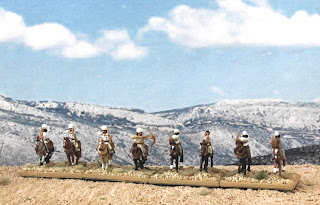 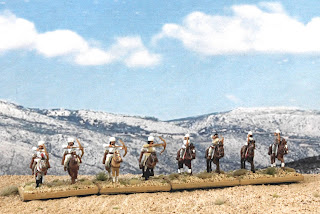 On Tuesday afternoon Craig came over to my place and we played another Pacto sized Mortem et Gloriam game, with his Anglo-Danes taking on my Vikings. This proved to be quite a close game and the Viking centre threatened to collapse early on before recovering. Eventually the Vikings ground down the Anglo-Danish shieldwall in the centre and the Select Fyrd proved no match for the Huscarls and Hird on the Viking's left flank. It was a much closer result then it appeared as at least four Vikings units were on the verge of breaking.
at September 15, 2020 10 comments: