On Tuesday afternoon Craig came over to my place and we played another Pacto sized Mortem et Gloriam game, with his Anglo-Danes taking on my Vikings. This proved to be quite a close game and the Viking centre threatened to collapse early on before recovering. Eventually the Vikings ground down the Anglo-Danish shieldwall in the centre and the Select Fyrd proved no match for the Huscarls and Hird on the Viking's left flank. It was a much closer result then it appeared as at least four Vikings units were on the verge of breaking.
at September 15, 2020 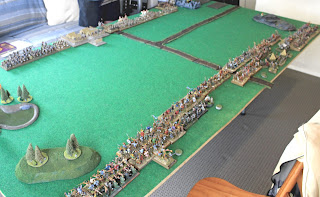