On Tuesday afternoon I played a solo Dux Bellorum game out in the shed with my Late Romans versus Sassanids. Each side had 45 points and six leadership points with the Sassanids as the aggressors. The game went on for quite a few turns, as Dux Bellorum games tend to do, and although the Sassanids won quite convincingly, it was a lot closer than the end result indicated.  A big advantage for the Sassanids was their firepower and this really wore the Romans down.

The ability to fire at the start of the turn before any movement really worked in their favour as retreats from the previous turn's combat meant they could actually fire as units were separated. It was certainly good fun for my Sassanids' first outing and I will try another game but more play testing is required. Below I've cobbled together a brief overview from the MeG Sassanid lists and some ideas for a Sassanid army list and unit stats that I used to play the game.

Early Sassanid Armies were similar to later Parthian armies and retained the use of cataphracts and horse archers. Ardashir I, founder of the Sassanid Persian dynasty, introduced elephants. Sassanid infantry were usually, unarmoured, with spears and wicker shields (Paighan), equipped with bows (Kamandaran) or skirmishers (bow, sling and javelins) and unable to match Roman infantry. The Savaran or Aswaran (mounted Iranian aristocrats) were always the core of Sassanid armies but over time they relied less on the fully armoured cataphract and more on the armoured horse archer. Later seventh century Sassanid armies had quality Dailami guard infantry and Armenian allies before they succumbed to the early Arab conquest armies.

Horse archers can shoot in any direction but have a 2 BW range. They will attempt to evade when charged and may shoot at full effect but will suffer -1 in combat if caught.

Mounted troops are reluctant to stand when charged by elephants and will usually attempt to evade if possible, they suffer -2 if caught in combat.

Elephants who suffer casualties from shooting or combat must make a bravery test, which if failed will result in a stampede. Roll 1 D6 = 1 forward, 2 90 degrees left, 3 90 degrees right, 4,5,6 to the rear. All troops contacted will suffer the loss of a cohesion point.

Elephant crew can shoot in any direction with bows or javelins but only have a 2 BW range. They are able to shoot over intervening friendly troops because of the elephant/howdah height advantage.

A suggested army list taken from the unit stats table below. Take only one fully armoured Savaran unit, they’re very powerful, with more the game may be unbalanced.

Here are some Cataphracts, Clibinarii and more infantry for my Sassanid army. I now have enough painted units for a Dux Bellorum game (see group shot below) so will try that soon with my Late Romans as opponents. I have Middle Imperial and Early Byzantine armies to paint as well so there will be no shortage of armies to fight them. The figures are mainly a mix of A&A, Gripping Beast and Aventine with LBM shield transfers and banners.

Here are a dozen bases of infantry for my 15mm New Kingdom Egyptians, that I've just finished painting. The figures are a mix of ranges with Chariot Miniatures, Essex Miniatures, Gladiator Games and Peter Pig. I still have another six bases to finish for both my Egyptians and Hittites, before I have enough painted 15mm figures for a Pacto sized Mortem et Gloriam (MeG) game. The MeG army lists have been updated with separate lists for each of the three formats, a massive amount of work with over 500 army lists!

The fourth edition of L'Art de la Guerre rules is due to be released next week so that may be another option when I finally get my copy in the mail. I already have large 28mm New Kingdom Egyptian and Hittite armies but 15mm does have definite advantages and a much larger figure range. I quite fancy the Khurasan Gasgans to fight my Hittites but the expense and hassle of ordering from the US does put me off. 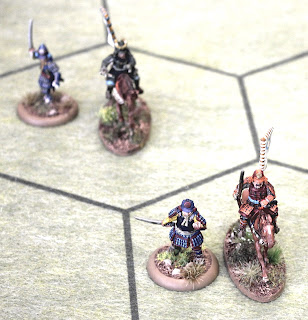 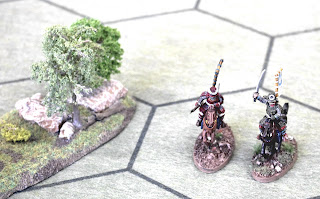 Last Saturday afternoon Craig came over to my place with his lovely Perry Samurai and we played three games of Command and Colors Samurai Battles. The first two games were with his figures, we swapped sides and the scenario was the second in the board game, the Takeda Vanguard on Arita Castle. We just used the figures Craig brought along, with very small unit sizes and there were no actual Mori or Takeda clan painted figures. Craig's figures are all based for his Samurai skirmish rules, Ronin which are published by Osprey and great fun.

Craig cleaned up quickly as the Mori in the first game, the scenario only has three victory banners, and in the second game I also won as the Mori but the result was a bit closer. The third game we just played with the blocks and this was third scenario in the board game, Arita Castle Phase 2 Matauchi River. This was a cracking game that had plenty of ebb and flow, before Craig emerged victorious, as the Mori again, this time 6-3 victory banners. All three games were great fun and provided an excellent afternoon's gaming. I've enjoyed playing this game so much that I've ordered 28m Samurai figures, so looking forward to this and reading up on the Sengoku Jidai period! 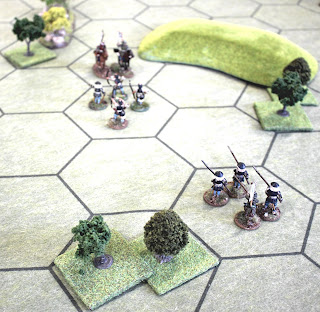 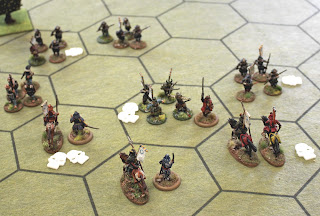