Last Tuesday afternoon Craig came over to my place and we played a Pacto (small) sized Mortem et Gloriam (MeG) game, with two similar Early Imperial Roman forces, fighting  a civil war. On my left flank I tried to chase his slingers down with my cavalry and eventually was successful on the third attempt. My auxiliaries surprisingly managed to hold the charge of his Praetorians and Veteran Legionaries. On my right flank my cavalry managed to route his. In the centre it proved to be a very one sided like last week, but this time the result was reversed, with Craig on the receiving end of some terrible dice rolling in combat and with his Kill a Base (KaB) tests. Craig's centre was destroyed and when his last cavalry unit routed it was all over. Because of the small unit sizes in Pacto, usually two bases a TuG or SuG, even a unit with only a single wound can easily break, if you roll a skull in a KaB test. These can be quite volatile and can cause an entire command to disappear in the blink of an eye, if you're unlucky! 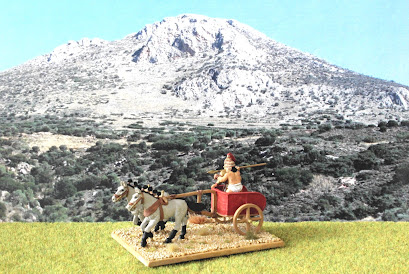 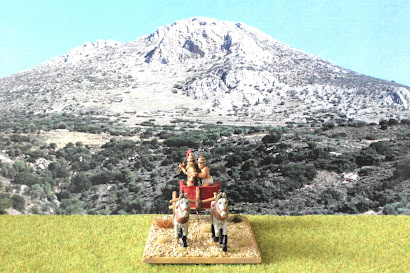 Here are two Mycenaean chariots that I've just finished painting, both are by Eureka Miniatures from their Bronze Age Greeks range. The first one is a box chariot with a charioteer in Dendra armour which dates to the end of the 14th century BC. The second one is a rail chariot which first appeared in the 14th century but is mainly depicted in vase paintings dating from 1300-1150 BC. The back drop photo is of the hill behind Mycenae.

Andrea Salimbeti has an excellent website, The Greek Age of Bronze: Weapons and Warfare in the Late Helladic Time 1600-1100 BC, which has a very interesting page on Mycenaean chariots: 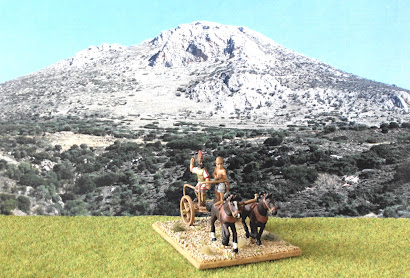 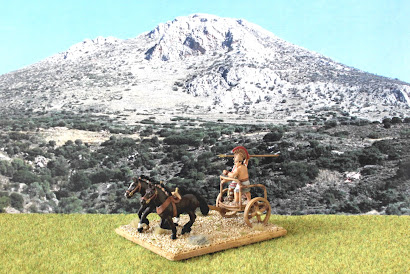 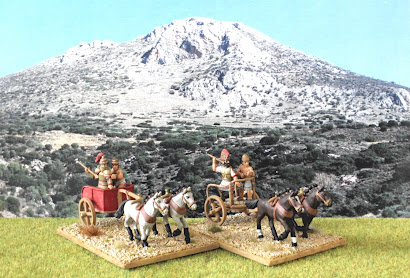 Last Monday afternoon I went over to Craig's place and we played a Pacto (small) Mortem et Gloriam (MeG) game, with his Greeks taking on my Early Persians. This turned out to be a very one sided game with the Persians not putting up much resistance. The Persian cause was not assisted by poor shooting and some fairly dire dice rolling in their Kill A Base (KaB) tests which are basically morale tests. It was good fun to get the troops out and have a game with an actual opponent for a change. We used the coloured command discs rather than cards and I much prefer these, less clutter and less intrusive. I will have to put in an order to the Plastic Soldier Company and get some. Hopefully we will get in another game next week, the plan is for an Early Imperial Roman civil war game. 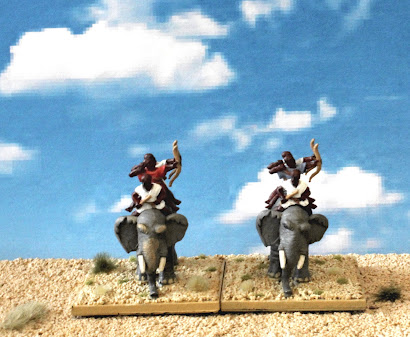 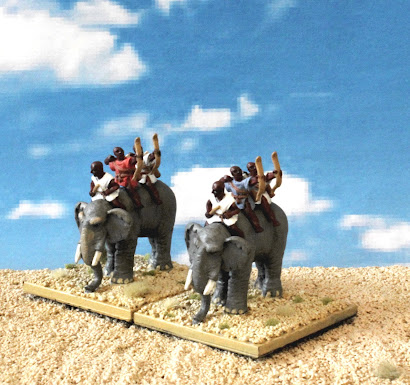 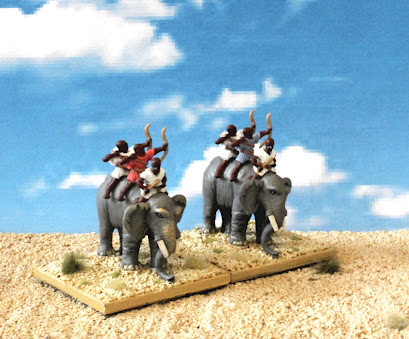 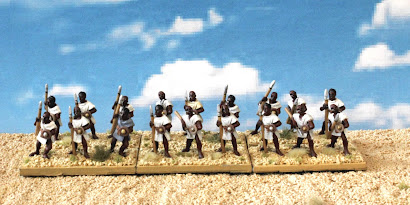 Here are the first dozen bases of my 15mm Blemmye army for MeG. The elephants, spearmen and archers are all by Forged in Battle. There is not a lot of information available on the Blemmye, my two references at the moment are the Osprey book by David Nicolle, Rome's Enemies (5) The Desert Frontier and Phil Barker's WRG book The Armies and Enemies of Imperial Rome.

If you're interested in 15mm, Forged in Battle are just about to release, on Friday 28 April 2020, their Dark Ages ranges which includes numerous armies, as well as buildings, ships, transfers and additional packs for existing ranges. There are some great looking ranges there so check out their website. 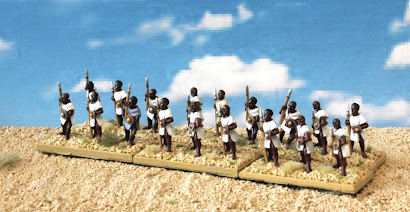 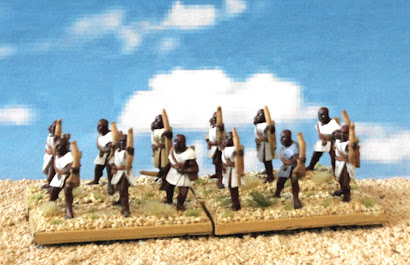 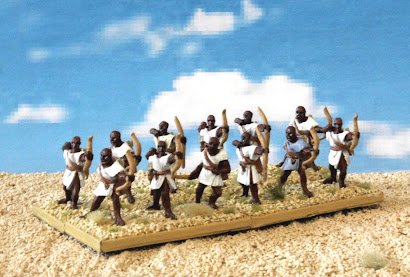 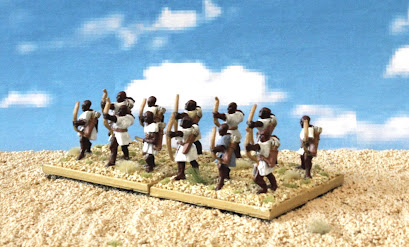 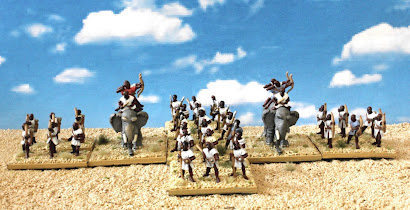 Last Wednesday afternoon I played another solo Command and Colors Ancients (CCA) game out in the shed. The scenario was Jaxartes River with the Macedonians under Alexander taking on the Saka under Satraces. I made a few changes to the scenario making the Saka all light bow cavalry, except for one medium cavalry unit, Satraces' nobles, who were also bow armed. I also used the Parthian shot special rule introduced in Command and Colors Medieval (CCM) for light bow cavalry and the Saka medium cavalry were also able to use this when evading.
This rule allows a unit to evade two hexes while firing with two dice and it can only be hit with the appropriate coloured dice ignoring all other results. The only change to the Macedonians was to allow the light cavalry Prodromoi to hit on swords as well, reflecting their use of the sarissa. Missile fire across the river was possible only for Alexander's catapults but troops crossing the river could fire and were targets themselves.
In retrospect the Parthian shot rule was overly effective as the the Macedonians never managed to make any headway and a double flag dice result on the Prodromoi, a retreat of eight hexes and a casualty for every hex beyond the base line they were unable to retreat, seemed to typify their luck in the game. In the end the Saka slaughtered the Macedonians 7-2 victory points. This was a totally unexpected and rather unsatisfying game, given the complete reversal of the actual historical result. While the Parthian shot rule reflects the tactics of steppe nomad armies it may be better reduced to a single dice for CCA scenarios, as moving light bow cavalry normally shoot with only one dice anyway.
at August 06, 2020 12 comments: