Lion Rampant War of the Roses Game - The Convoy

Last Wednesday night Rick and I met down at the Vikings Club in Lanyon for a Lion Rampant, War of the Roses game. The scenario was The Convoy, where the Lancastrian attackers had to escort and protect a wagon convoy from one corner of the table to the other. The Yorkist defenders had to prevent this and their forces were split in three, one each in the remaining corners of the table. Both sides had 36 points. In the end we ran out of time with the convoy about half way across the table but the Yorkists were in pretty bad shape and three units had already routed.

Email ThisBlogThis!Share to TwitterShare to FacebookShare to Pinterest
Labels: Lion Rampant, War of the Roses


Yesterday I finally received my long awaited copy of the new GMT Games boardgame, Command and Colors Medieval (CCM) by Richard Borg. This morning I played a solo first game with the Utus River scenario, the first of nineteen scenarios, with Attila and his Huns taking on an Eastern Roman army under Arnegisclus. The details of this encounter are fairly obscure. For gamers familiar with Command and Colors Ancients (CCA) much is the same but there are changes, some that reflect the increasing importance of cavalry and the reduced role of infantry in set battle in the fifth and sixth centuries.

All cavalry units are now four blocks rather than three and Heavy Infantry now fight with four dice instead of five. Other changes include bow armed medium, heavy and super heavy (cataphract) cavalry for many scenarios with the Huns and Sassanids, superior armour class and superior stature, Parthian shot rules for evading light bow cavalry and Inspired Actions tokens which can be used when playing a Leadership Command Card. Medium Infantry now move like Auxilia and may move one hex and battle or two hexes and no battle. The Inspired Actions feature is an interesting addition to CCM and there is a reference sheet for this. The tokens can also be used to Move a Leader, Bonus Battle and Bravery and can be gained in a number of ways.

In my solo game the Byzantines performed quite well and were defeated by the Huns by nine to seven victory banners, a surprisingly close result, and were actually leading the game at one point. The mounted Hun medium and heavy bow armed cavalry are really powerful and mobile units, especially with an attached leader, and are a double threat in ranged or close combat. I'm really looking forward to trying out the other eighteen scenarios in CCM and will definitely be planning and playing games with miniatures like we've done with CCA.

Battle of Saguntum 75 BC - Sertorius versus Pompey

Last Sunday afternoon Craig and I met down at the Vikings Club and we played a L'Art de la Guerre (ADLG) game of the Battle of Saguntum 75 BC with Sertorius taking on Pompey. It was one of the quietest monthly meetings I've ever seen, with only three others playing DBA, no doubt the fact that it was a June long weekend contributing to this. Craig was Sertorius, as he is about to take off for a three week Iberian holiday, while I commanded the Romans under Pompey.

This turned out to be a cracking game that went right down to the wire and it was neck and neck for most of the game. In the end it was a narrow victory for Pompey, although his entire corps was wiped out and he survived numerous general death rolls, including three where his unit was routed! Sertorius, on the other hand, led his corps of four veteran legionary units through the battle almost untouched, though his Spanish allies were killed almost to a man. Thanks to Craig for a great game. 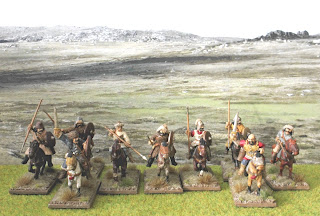 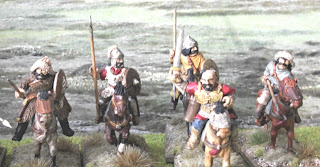 Here are some Gripping Beast Huns. The noble cavalry I painted ages ago but the horse archers are all recent. I have heaps of Wargames Foundry Huns to paint for this army. Aventine and Footsore both have really nice Hun/Steppe Nomad ranges. I may have mentioned this before, but I really like steppe nomad horse archer armies and have Scythians, Parthians, Sassanids, Huns, Seljuks and Mongols. 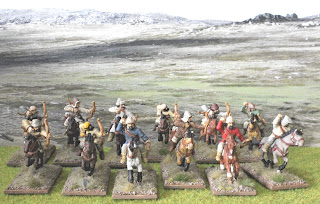