On Wednesday afternoon Garry and Craig came over to my place and we played a Pacto sized Mortem et Gloriam (MeG) game out in the shed. Craig and I commanded the Indians, while Garry commanded the Late Achaemenid Persians. The Indian left flank got off to a bad start with the four horse chariots and elephants charging Greek hoplites, only to be routed in the same turn. After some desultory shooting by the Indians in the centre, the Persians closed in combat. The Indians tried the same tactic on the right flank but the Persian cavalry ran away. At this point we ran out of time but with both sides committed in combat, the Persians definitely had the upper hand.

Battle of Crimissos 341 BC - Command and Colors Ancients Game 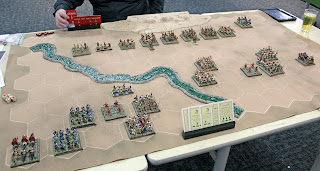