Earlier today I played a solo Infamy, Infamy game out in the shed. The scenario was a general engagement (Scenario Seven p.29), with a Southern Tribal Briton Warband (105 points) taking on an Early Imperial Roman force the same size. This was my first game with the rules, so it was slow going, and sub-artic weather conditions (it's snowing on the east coast of Australia today) did not help. I'd read the rules and watched all of the TFL's Infamy videos on YouTube, which were very handy. They're quite a detailed set of rules and you tend to play a lot of turns in a game. In the end I ran out of time, the Britons had the upper hand but a result was still a fair way off.

Galatians deployed on the left, Seleucids on the right Opposite end Seleucid elephants attack Galatian warriors Galatians attack on the le... 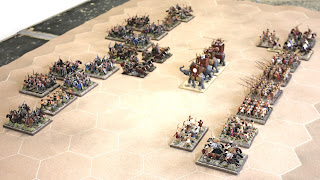