On Sunday morning out in the shed, we played a Chariots Rampant game with the invading forces of Hatti taking on the defending forces of Alisaya (Cyprus). The Cypriot forces were Later Mycenaeans. Two Hittite kings, Tudhaliya IV(1237-1209 BC) and Suppiluliuma II (1207-? BC) actually campaigned in Cyprus, most probably to secure grain supplies, see Trevor Bryce's book Warriors of Anatolia pp.238-239 and pp.258-263 for details. The Hittites had the early advantage in the game but in the end both sides suffered heavy casualties, with something of a Pyrrhic victory for the Hittites.

Yesterday in the mail I got the new Lion Rampant A Viking in the Sun supplement from Northstar. This was eagerly awaited as it covers the... 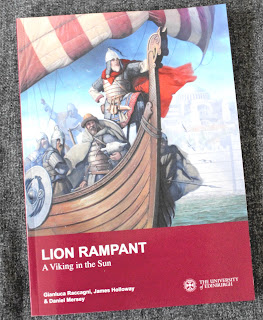