The Landing - Lion Rampant A Viking in the Sun Game 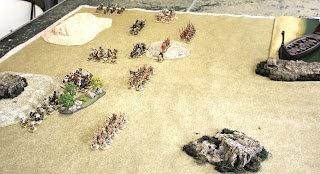 On Wednesday morning I played a solo Lion Rampant A Viking in the Sun game out in the shed. The scenario was The Landing (p.80.) in Sicily with the Muslim defenders led by Abd Allah fighting the Byzantine attackers led by Harald Hardrada. The aim for the Byzantines and Varangians under Harald was basically to exit the northern edge of the table with as many units as possible.
This proved to be a tough scenario for the attackers in my game. Only the Varangians under Harald escaped to fight another day and only one unit of Muslim Fierce Foot was destroyed. It was a comprehensive victory for the Muslims with five Byzantine units destroyed, two of these nearly made it off the table. 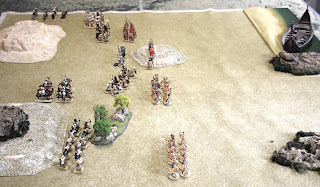 Email ThisBlogThis!Share to TwitterShare to FacebookShare to Pinterest
Labels: Lion Rampant: A Viking in the Sun, Muslims in Sicily, Nikephorian Byzantines, Varangian Guard 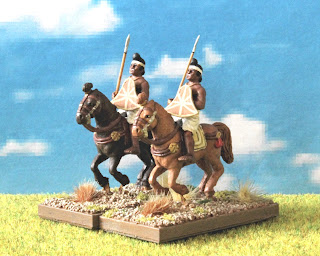