On Monday Craig came over to my place and we played a Lion Rampant 2nd Edition Early Crusades game. We diced for scenarios and got Scenario 7: Hold on Tight, Craig was the attacker with his Seljuk Turks and I was the defender with my Early Crusaders. We advanced in turn to the objective, a field in the middle of the table. The Seljuks had the best of the early missile fire exchange. My recently painted Turcopoles failed to activate repeatedly in turns with both shooting and skirmishing and most of the fighting was done by the Crusader knights. The Seljuks wiped out the Crusaders leader's unit and when the   Crusader spearmen failed a courage test it was all over, a convincing victory for the Seljuks.

Here are some Anglo-Danish huscarls that I've just finished painting. They are Renegade Miniatures with a mix of LBM transfers and han... 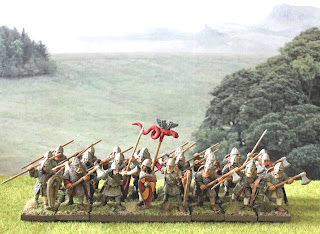